Coca-Cola Encourages Consumers To Decide The ‘Right Amount’ For Them

By Newsroom on October 7, 2016Comments Off on Coca-Cola Encourages Consumers To Decide The ‘Right Amount’ For Them

Coca-Cola South Pacific has announced the launch of a new campaign which demonstrates Coca-Cola’s ongoing commitment to providing Australians with more choice when selecting the perfect size refreshment to suit their lifestyle and occasion.

The campaign forms part of Coca-Cola’s strategy to make it easier for consumers to choose the drinks that make the most sense for them.

To support the launch, the brand has rolled out a TVC originally created by McCann Buenos Aires, that focuses on the message that Coca-Cola products, like all things in life, are best enjoyed in the ‘right amount for you’. As part of the multi-million dollar campaign, the TVC will run nationwide for three weeks through October. 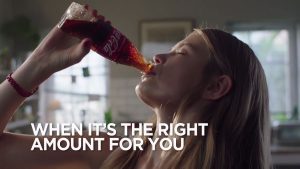 The campaign celebrates the introduction of Coca-Cola’s new 250ml bottle into the Australian market, which has increased availability of small packs in more than 2,500 retail outlets. The launch of the new bottle follows the brand’s continued success of its smaller pack offerings, which were introduced in response to consumer demand for smaller package sizes and have proved popular with retailers and consumers.

Sales of single serve small packs (i.e. those under 300ml) grew by 88% between 2013 and 2015. Today Coca-Cola offers small packs in 89% of our grocery stores, and 69% in convenience stores and petrol stations. That number continues to grow.

Lisa Winn, marketing director, Coca-Cola South Pacific said: “At Coca-Cola, we have a legacy of offering choice and innovation to customers. The launch of our ‘In the Right Amount’ campaign showcases our commitment to making sure smaller packs are available when consumers want to purchase them. The campaign has a powerful but sensible message that we hope will resonate with our customers. Our smaller packs have proved extremely popular in the past two years and we expect that popularity will increase further with the launch of our new 250ml bottles.”

Coca-Cola Encourages Consumers To Decide The ‘Right Amount’ For Them added by Newsroom on October 7, 2016
View all posts by Newsroom →