By Newsroom on September 22, 2017Comments Off on Coca-Cola Enlist FIFA 18’s Alex Hunter to Remake One of Its Classic Ads

Alex Hunter is one of the most popular young football players today. The grandson of a famous British player in the 1960s, the teenager is trying to break through in the storied English Premier League. Millions followed his story last year as he began to make a name for himself—even though he’s not a real person. 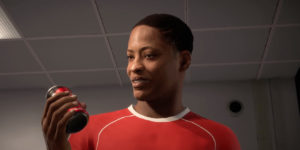 Hunter was the protagonist in the story mode of FIFA 17 called “The Journey,” a new feature of the EA Sports game that allowed fans to leave the pitch and follow a player’s personal life in the limelight. FIFA 17 players who reached a certain level of the game saw Hunter sign his first endorsement deal within the game, for Adidas.

And now, for FIFA 18, Hunter has a new ad deal—for Coca-Cola. Specifically, he’s a brand ambassador for the new Coca-Cola Zero Sugar. Not only that, but he also stars in a new Coke commercial that’s an obvious re-creation of the classic “Mean Joe Greene” spot from 1979.

“We saw the opportunity to capture the essence of this classic spot, which is beloved by so many fans, and bring it forward to younger generations who may be familiar with the original,” said Matt Wolf, VP of entertainment, ventures and strategic alliances at Coca-Cola. “And we added a modern touch by replacing the jersey toss with a fan selfie with Alex.” 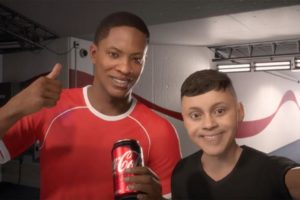 Execs at Coke and EA both said the partnership made sense because of Coke’s existing interest in soccer via its World Cup sponsorship, as well as Coke’s role in players’ lives away from the field rather than on it.

“Fans of the FIFA game, especially younger fans, share a 360-degree passion for football – playing, watching and gaming,” said Alban Dechelotte, Senior Entertainment Marketing Manager at Coca-Cola. “So we decided to connect the love stories Coke has with the real and virtual worlds of football through our partnership with the world’s biggest football video game.”

Coca-Cola Enlist FIFA 18’s Alex Hunter to Remake One of Its Classic Ads added by Newsroom on September 22, 2017
View all posts by Newsroom →