By Newsroom on July 20, 2015Comments Off on Coca-Cola Looks to Get Britain Active with Biggest Ever Rugby On-pack Promotion

The firm, which is the official soft drinks provider of RWC 2015, shot the video in settings including Brighton Beach and Mile End Skate Park, showing Robinson and Hunt encourage anyone and everyone to pick up the sport.

In the coming weeks, a different TV ad will run alongside an out of home campaign, featuring all four Coca-Cola variants. Additionally, the brand’s biggest ever rugby on-pack promotion will back the launch, giving drinkers the chance to win up to one million exclusive Rugby World Cup 2015 Coca-Cola Gilbert replica rugby balls. 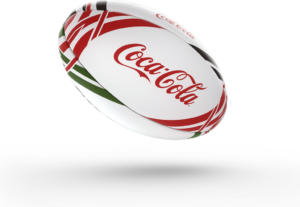 Paul Dwan, general manager of Coca-Cola’s Rugby World Cup 2015 team, said: “We want to use our sponsorship to help take the sport of rugby to an even wider audience, hopefully inspiring people to get involved in the Tournament and have some fun. Our biggest ever rugby on-pack promotion will… [give the UK public] the opportunity to try the sport like never before – whether that’s through our ParkLives programme, partnership with StreetGames or in the garden or park with family and friends.”

The campaign marks Coke’s 20-year sponsorship of the tournament and feeds into wider, ongoing efforts to its bolster ties to the biggest sporting events in order to maintain awareness as well as leverage sales at key points in the year.

Coca-Cola Looks to Get Britain Active with Biggest Ever Rugby On-pack Promotion added by Newsroom on July 20, 2015
View all posts by Newsroom →