By Newsroom on June 8, 2018Comments Off on Coca-Cola Tackles Prejudice and Islamophobia in Touching Ramadan Spot

Coca-Cola is encouraging people to show a little kindness and empathy this Ramadan, whether or not you personally observe the religious festival. Their ad from the Coca-Cola team in the Middle East and FP7 McCann UAE follows a homesick and lonely Muslim woman who finds some unexpected friendship from a thoughtful stranger. 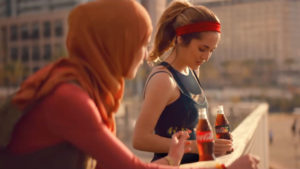 The spot embodies the optimistic spirit of the Coca-Cola brand but doesn’t shy away from tough topics either. In the ad, the young woman is mocked for wearing a headscarf and treated with hostility by judgemental passers-by – until another young woman spots her distress and buys her a Coke. She can’t break her fast until the sun sets – so the two share a moment and wait together to share a drink.

‘Iftar’ is the first meal consumed after sunset during Ramadan. The meal usually consists of two or three dates, which you can clearly see in the ad too. 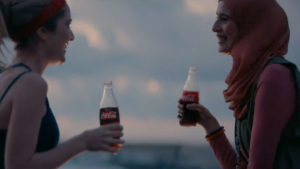 And the film has clearly struck a chord with viewers – the film was originally posted on Coca-Cola Netherlands’ Facebook page and has amassed 223,000 organic views and a raft of positive comments. On YouTube the spot has clocked up nearly 2.5 million views.

Seasoned adwatchers will also notice that the spot also features a cover of the famous Coca-Cola anthem ‘I’d Like to Teach the World to Sing’. While there are no credits out there yet, we understand that the cover was actually performed by a contact of the production team.

It’s not the first time Coca-Cola and FP7 McCann have tackled prejudice in their Ramadan advertising. In 2015 their campaign ‘Remove labels this Ramadan’ challenged viewers to question their own assumptions and look beyond superficial divisions.

Coca-Cola Tackles Prejudice and Islamophobia in Touching Ramadan Spot added by Newsroom on June 8, 2018
View all posts by Newsroom →