By Newsroom on August 8, 2014Comments Off on Coca-Cola Trials Virtual Assistant in Digital-Shopper Marketing Drive 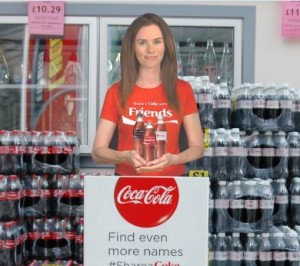 Coca-Cola Enterprises has created a virtual assistant as part of a new digital shopper marketing trial to engage retailers and drive awareness of its 2014 ‘Share a Coke’ campaign.

The assistant, called Isabelle, will be used to update retailers visiting Dhamecha cash and carry depots in London on the drinks company’s summer plans for the campaign.

Dressed in Coca-Cola branded clothing, Virtual Assistant Ultra Isabelle, created by Tensator, will tell customers about the success of the campaign to date, suggest how retailers can maximise shopper interest in their stores and play the new ‘Share a Coke’ TV advert.

Simon Miles, digital director at Coca-Cola Enterprises, commented: “After the success of the ‘Share a Coke’ campaign last year, we were keen to ensure our customers understand how the campaign can benefit them and how they can get involved. Digital shopping marketing innovation, such as ‘Isabelle’, is a creative and fun way to reach our customers with the campaign and is a piece of genuine digital innovation that we’re excited to bring to the market to build on the success of last year’s campaign.”

The trial will see Isabelle moved between selected Dhamecha depots across the summer.