By Newsroom on October 23, 2013Comments Off on Coca-Cola Unveils Broad Array of New Products, Packages at NACS 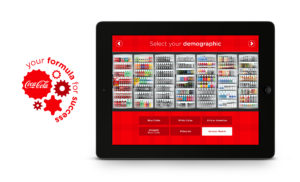 With the National Association of Convenience Stores (NACS) show returning to Atlanta for the first time since 2010, executives from Coca-Cola didn’t have to travel very far from the company’s downtown headquarters to the show’s location at the Georgia World Congress Center. That was probably a good thing considering that they certainly had their hands full with a heap of new products and packages that Coke unveiled at the event.

Staffed by a small army of sales and marketing executives, Coke’s sprawling booth was packed with a broad array of line extensions and packaging updates, each highlighted by the company’s new Digital Cold Vault platform. The video-based technology uses demographic data and market insights that give C-store operators the ability to customized beverage sets each designed to increase sales and shopper satisfaction on a store to store basis.

Embedded within the Digital Cold Vault presentation were several of Coke’s new product introductions, which the company termed as “business-generating innovation.” From the recent launch of Sprite Cranberry, to an upcoming revamp for Vitaminwater’s 20 oz. bottles, to a new cold-activated 16 oz. can, Coke sought to offer retailers new ways to attract consumers and maximize shelf space. 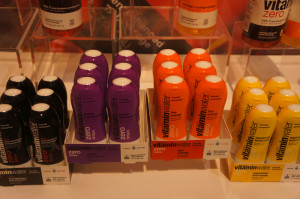 For Coke, part of that meaningful innovation meant doubling down on its presence in the liquid water enhancer category, which was pioneered and dominated by Kraft Foods’ MiO brand. Coke’s foray into liquid water enhancers began in October 2012 with the launch of Dasani Drops, and earlier this year, the company introduced Powerade Zero Drops, a likely response to MiO’s launch of MiO Fit, a sports-centric line extension. Coke will soon extend the “Drops” platform with products from Minute Maid and Vitaminwater Zero, both scheduled to debut early next year.

Minute Maid Drops is “the only liquid beverage flavor enhancer in the U.S. made with real fruit juice (an important driver of purchase intent)” according to a fact sheet that Coke distributed at the NACS show. The products contain 5 calories per serving and will come in three flavors: Lemonade, Pink Lemonade and Mango Tropical. Each will be packaged in a 1.9 oz. bottle. 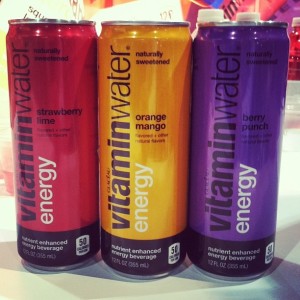 A line of liquid water enhancers wasn’t the only brand extension for Vitaminwater. Coke has reprised the short-lived Vitaminenergy with a new line called Vitaminwater Energy. Similar to Starbucks’ Refreshers brand, the products are naturally sweetened and formulated with an energy blend that includes green bean coffee extract and B-vitamins. Unlike the previous incarnation of the line, the non-carbonated beverages are packaged in slim 12 oz. cans (as opposed to a 16 oz. package) and contain 50 calories per can. 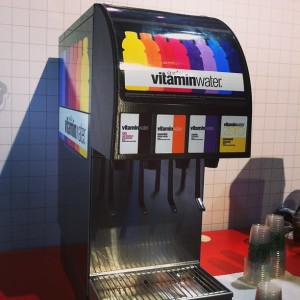 Fruitwater, the Vitaminwater brand extension which Coke revived earlier this year, will have two new flavors — Fizzy Lemonade and Tropical Pineapple — coming in 2014. The artificially sweetened, zero-calorie carbonated drinks are, like many new brands and products seen at the NACS show, similarly positioned to Talking Rain’s Sparkling ICE, which has seen many companies attempt to latch on its remarkable growth rate over the past two years.

Coke is also planning a few other brand line extensions to be released next year. In March, the company will introduce a limited-edition Tropical Mango flavor for its Powerade brand, which will include the tagline “Official Sports Drink of the FIFA World Cup” on its label. Coke will also roll out Minute Maid Juice To Go, a line of fruit and vegetable blends that will initially come in two varieties: Berry Blend and Tropical Blend. Packaged in 15.2 oz. bottles, the products will debut in January. Coke is planning a February launch for an extension of its NOS energy drink line called NOS Charged Citrus, which will come out in regular and zero-calorie varieties.

On the packaging front, Coke is planning a mild revamp of Vitaminwater’s 20 oz. bottles. Along with a slightly shorter package, Coke has simplified the look and design of the labels, which will more prominently feature the brand name, and eliminated much of the added text that has been a mainstay of Vitaminwater packaging since its inception. Additionally, the products also included the phrases “nutrient enhanced water beverage” and “naturally sweetened” in bolder font. The new look is scheduled to roll out next year.

Coke also introduced a few new packaging options for its flagship cola. Keying on recent innovation seen from beer conglomerates (MillerCoors) and entrepreneurial beverage companies (Hiball) alike, Coke has introduced a new 16 oz. cold-activated can. Like offerings from Coors and Hiball, the can features graphics that change in color depending on the temperature of the package. The front of the can features an image of a white contour glass, and when the can is chilled to 46 degrees Fahrenheit, three blue-colored cubes appear inside of the glass.

The cola giant also introduced a limited-distribution 19.2 oz. can which highlights Coke’s promotion with ESPN’s “College Game Day” show as well as partnerships with NASCAR and the upcoming 2014 FIFA World Cup. Described by Coke as “a traffic-driving package,” the can — which was first introduced to the market by craft brewer Oskar Blues – will be distributed in select markets around the country with a suggested retail price of $0.99. 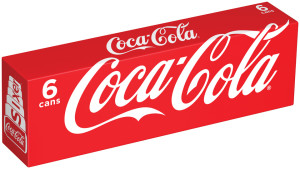 While the new cans certainly garnered a significant amount of attention at the show, it was Coke’s new 6-pack of 12 oz. cans that turned quite a few heads. The “Sixer,” a name that Coke has trademarked, is a slim cardboard package that can be retailed and stored horizontally or vertically, an attribute that Coke says will appeal to consumers living in small households. The new 6-pack will be utilized for a variety of Coke products including Diet Coke, Fanta, Barq’s and FUZE.

Coca-Cola Unveils Broad Array of New Products, Packages at NACS added by Newsroom on October 23, 2013
View all posts by Newsroom →