By Newsroom on December 1, 2015Comments Off on Coca-Cola Unveils Limited Edition Bottle Label That Turns Into A Festive Bow 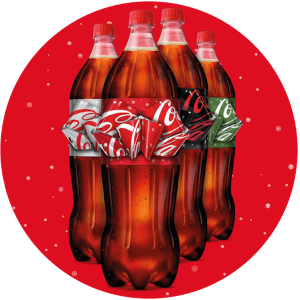 Coca-Cola has added some festive cheer to its 1.75 litre bottles in the UK with a new limited edition bow design, allowing consumers to transform the bottles’ wraparound labels into neat decorative bows.

Consumers can peel away the bottle label to reveal a tab that, when pulled, forces the label to contract and form a bow shape on the front of the bottle. Available from the beginning of December across the four key variants – Coca-Cola, Coca-Cola Zero, Diet Coke and Coca-Cola Life – the festive format will help retailers to drive seasonal sales and encourage consumers to share Coca-Cola with a loved one, the brand said.

The novelty pack also means that shoppers can add something special to the table when hosting festive get-togethers.

The new format will be supported by in-store point-of-sale material and the launch of Coca-Cola’s Give a Little Happiness television advertising campaign, to air across the UK from early December with a ten-second homage to the new bow design.

Following on from the launch of its Christmas truck on-pack promotion, nationwide truck tour and Holidays are Coming television campaign, the new advert incorporates the iconic Coca-Cola Christmas truck to deepen the brand story, drive engagement and help retailers to maximise their sales during the holiday season.

Coca-Cola Enterprises director of operational marketing Caroline Cater said: “Christmas is the most popular calendar moment of the year, and as soft drinks is the most frequently bought category during the festive season, its vital we help retailers make the most of the opportunity and offer exciting national campaigns to boost sales. In line with this, our new festive format will be backed by a substantial marketing spend, which includes our ‘Give a Little Happiness’ advert to further increase visibility over the holiday season. We’d therefore recommended retailers stay stocked up on our Coca-Cola range to capitalise on the occasion.”

Coca-Cola Unveils Limited Edition Bottle Label That Turns Into A Festive Bow added by Newsroom on December 1, 2015
View all posts by Newsroom →