By Newsroom on September 17, 2013Comments Off on Coca-Cola’s #LetsEatTogether Campaign Blends Live Tweets into a TV Ad

The strategy seemed to work well for about two days, until users started tweeting profane and inane messages to Skittles. Soon, the Skittles homepage looked more like the inside of a bathroom stall.

Coca-Cola is the latest company to gamble on live tweets, but they’ve wisely inserted a middleman. Their “Let’s Eat Together” ad campaign in Romania infused live tweets into a real-time television commercial.

According to MRM general manager Nir Refuah, the ad leveraged the premise that 60 percent of Romanians don’t really eat meals together. Often, they eat in front of the television, or they spend their meals staring at and tapping their second-screen mobile devices. 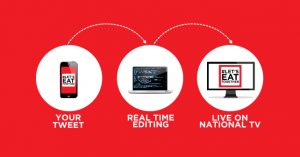 Using the hashtag #LetsEatTogether, Romanian viewers could tweet during the commercial to invite friends and family to dinner. The ad agency MRM Worldwide created a program that enabled marketers to grab live tweets, edit them and insert them into live commercials. About five to seven of all submitted tweets were incorporated into each airing of the commercial.

“It made people actually wait for the ad,” said Refuah. “How often does that happen?”

After the campaign, 15 percent more people associated Coca-Cola beverages with eating. Also, the ad increased Coca-Cola’s Romanian Twitter base by over 15 percent.

Skittles learned that giving the public too much control over Twitter created a mob mentality. Coca-Cola, four years later, has prepared the perfect Twitter secret sauce by balancing customer participation with their rightful tweet-screening prerogative.

Coca-Cola’s #LetsEatTogether Campaign Blends Live Tweets into a TV Ad added by Newsroom on September 17, 2013
View all posts by Newsroom →