By Newsroom on March 18, 2013Comments Off on Coke Zero & Conan Team Up To Promote March Madness 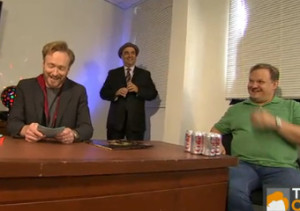 Coke Zero is turning to Conan O’Brien to add some pop to a March Madness campaign. O’Brien will appear in a spot Sunday during the NCAA tournament selection show on CBS.

O’Brien’s Los Angeles-based show will be shot in Atlanta the first week of April just as the Final Four comes to town. Coke Zero will be a top-line sponsor, and the brand’s “It’s Not Your Fault” campaign will link with the show.

Coke Zero is also backing a Conan music series with performances in Los Angeles, Austin and Atlanta. Andy Richter, the Conan sidekick, will emcee them.

TBS, where O’Brien’s show appears, is one of three Turner networks carrying March Madness games. Later this decade, TBS will carry the Final Four, marking the first time it has not been on CBS since 1981.

Coke Zero is the official “fan refreshment of the NCAA Final Four.” Coke annually runs spots in the Super Bowl for its flagship brand, then promotes Diet Coke in the Oscars and uses March Madness as a platform for Coke Zero.

Coke Zero & Conan Team Up To Promote March Madness added by Newsroom on March 18, 2013
View all posts by Newsroom →