By Newsroom on January 11, 2016Comments Off on Coopers Give New Year’s Revellers a Shout Out in OOH Campaign

How does one of Australia’s most loved beer brands say Happy New Year to its drinkers? By giving them the chance to say cheers to their family and friends on a digital billboard.

Developed by KWP! Advertising, ‘Coopers Shout Out’ let Australian beer lovers publicly shout out New Year messages to their best mates, family members and loved ones on a choice of 52 outdoor sites in major cities across the country.

In an Australian media-first, Coopers secured the entire APN digital network of billboards for the campaign. These outdoor sites are located in some of the busiest city hotspots in Australia including Federation Square in Melbourne, Kings Cross in Sydney, King George Square in Brisbane, Rundle Mall in Adelaide, as well as Perth and Sydney Airports.

Says Michael Gagliardi, senior art director, KWP!: “To make this whole thing possible, we built a website that enabled people to create their free Shout Outs using a Coopers beer brand template and then book the exact location and time their personalised message would appear. This information was then fed directly to the APN technical guys.” 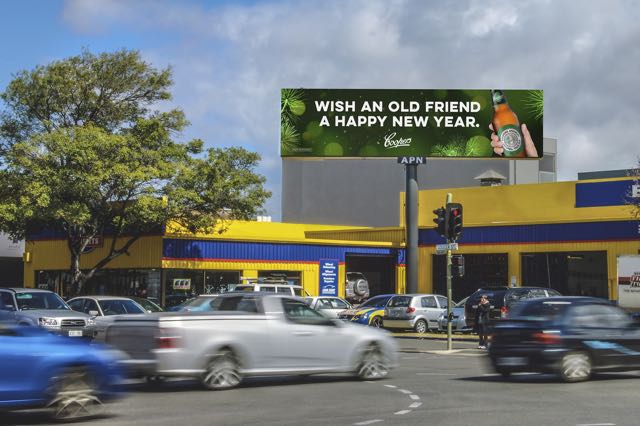 Coopers’ national sales and marketing director, Cam Pearce, said this was the first time that Coopers had taken advantage of such a unique and exciting opportunity.

Says Pearce: “We believe it’s a first in Australia from a media point of view. It was an exciting opportunity for Coopers and we’re thrilled to have played a part in the New Year’s Eve festivities of thousands of people across the country.”

Coopers Give New Year’s Revellers a Shout Out in OOH Campaign added by Newsroom on January 11, 2016
View all posts by Newsroom →