By Newsroom on November 8, 2013Comments Off on Coopers Wins ‘Best Marketed Beer’ Award & Thanks Fans via Facebook 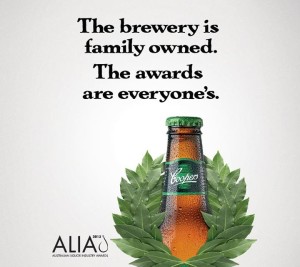 South Australia’s Coopers Ale has won the Best Marketed Beer award at the Australian Liquor Industry Awards, with the brewers subsequently thanking their supporters via Facebook.

The award is given to “the beer or cider brand that has received the most effective promotional support including POS, advertising campaigns and trade incentives.”

Coopers were up against Carlton, international giants Heineken and Peroni, interstate rival VB and a host of others.

“To all those that supported us we’d like to thank you. Not only did the brewery take out Best Marketed Beer and also Best Liquor Brand of the Year at the 2013 ALIA, but Original Pale Ale won Best Full Strength Beer for the 6th time in seven years,” Coopers said via Facebook.

“Cheers to all you Coopers drinkers!”

The event was held at Sydney’s Luna Park.

The digital marketing account for Coopers was awarded to Melbourne’s Citrus in 2011.

Coopers Wins ‘Best Marketed Beer’ Award & Thanks Fans via Facebook added by Newsroom on November 8, 2013
View all posts by Newsroom →