By Newsroom on May 1, 2018Comments Off on Dairygold and ROTHCO Make a Minute for The Good Stuff with Micro-Volunteering

In the next iteration of Dairygold’s ‘Make a Minute for the Good Stuff’ campaign, creative agency ROTHCO (part of the Accenture Interactive group) launch ‘Micro-Volunteering’, an omni-channel campaign, providing the Irish public a way to contribute to good causes around their busy day-to-day lives.

Executive Creative Director at ROTHCO, Alan Kelly comments: “Dairygold have been positioning their brand as one that could give people a minute for the good stuff. However, understanding that their audience may not always have the time to dedicate to charity work under the traditional structure of volunteering, we looked at how we could make a big difference by taking just a minute of people’s time.”

The ROTHCO team created a platform for Dairygold in which their consumer base could contribute, in a small way, to good causes by Micro-volunteering (MV). MV describes a volunteer, or team of volunteers, completing small tasks that make up a larger project. As a form of virtual volunteering, the tasks are usually distributed and completed online via an internet-connected device, including smartphones. 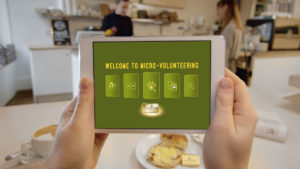 Dairygold have partnered with six charitable organisations for the campaign including: Be My Eyes, The Cheetah Conservation Fund, Count Flowers for Bees, Meitheal Duchas.ie, Crowdcrafting and Post Pals. They invite people to choose a cause they feel passionate about and complete a simple task, then spread the word about MV.

ECD Alan Kelly adds: “Volunteering in Ireland is suffering from the 666 rule. 60% of volunteers are over 60 and spend over 6 hours every week volunteering. Micro-volunteering is a completely different model that intends to change this. Instead of one person taking on a huge task or commitment, it’s broken down into lots of tiny parts that people can do online. Meaning that, for example, instead of one person counting all the types of flowers in a field over a year, a drone photographs the field and 150k people each spend a minute identifying flowers over their phone, getting the job done in two weeks. It’s not about donating money, but about actually volunteering in real-time to make a difference. That’s why this initiative is such a great fit for Dairygold.”

The Irish public can contribute via smartphone app or here. The platform will be promoted via a 20” TVC and Digital outputs also created by the team at ROTHCO.

Dairygold and ROTHCO Make a Minute for The Good Stuff with Micro-Volunteering added by Newsroom on May 1, 2018
View all posts by Newsroom →