By Newsroom on December 13, 2016Comments Off on DAVID and Gigigo Help Coca-Cola Surprise Loved Ones this Christmas

Christmas is around the corner and with it, so many people trying to surprise their loved ones. The problem is some people just aren’t good at surprises. Inspired by them, Coca-Cola created Message in a Bottle –a groundbreaking limited edition special cap that allows people to record messages up to 30 seconds long and play them back when twisting the cap to open the bottle, which will be seen during the Holidays throughout Central and Eastern Europe.

Paloma Azulay, Creative Excellence Director – Central & Southern Europe at The Coca-Cola Company said: “This Christmas we offer people the opportunity to thank those who make Christmas special in a different and creative way, with a very special bottle: A Coca-Cola that plays the message of a loved one, when opened. This way, we bring a meaningful experience through a Christmas icon: the Coca-Cola bottle.” 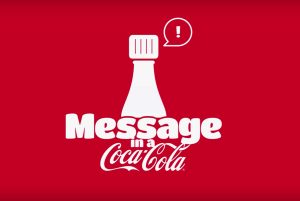 The campaign includes an online film – “Message in a Coca-Cola bottle” – and social media content and will run throughout Central and Eastern Europe rolling out gradually from December 14.

Created by DAVID and directed by Lucas Shannon from Landia, the campaign shares homemade videos of Christmas surprise fails and invites people to surprise their loved ones with a Message in a Coke.

The sound cap technology was developed by Digital Agency Gigigo from Spain.

This special edition bottle will be available only at two point of sale in Sicily in December, and amongst selected influencers, as a pilot test for a possible further launch in 2017.

DAVID and Gigigo Help Coca-Cola Surprise Loved Ones this Christmas added by Newsroom on December 13, 2016
View all posts by Newsroom →