By Newsroom on October 29, 2014Comments Off on David Beckham Raises a Toast to Travellers in Cannes With New Haig Club 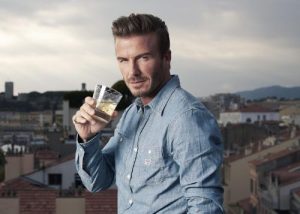 Beckham’s surprise visit to the show was part of a world tour during which he is promoting Haig Club, the distinctive and sophisticated new Single Grain Scotch Whisky developed in partnership with Diageo and British entrepreneur Simon Fuller. In September he dropped into Changi Airport in Singapore to showcase Haig Club cocktails, delighting travellers at the airport.

Haig Club is available for travellers to purchase in selected duty free stores and on selected airlines globally from this month.

The visit follows the launch of the first TV advertisement for Haig Club, directed by Guy Ritchie, which aired on UK television earlier this month.

Doug Bagley, Managing Director of Diageo Global Travel, said: “Having David with us today underlines his commitment to welcoming in a new era for Scotch Whisky. Our aim is to bring travellers new and exciting spirits and Haig Club is undoubtedly one of the most innovative developments in Scotch for years. It represents a dynamic and iconic partnership and we believe it will have global appeal.”

Haig Club is a new innovation from the House of Haig, Scotland’s oldest grain whisky dynasty. It is crafted using a unique process that combines grain whisky from three cask types. This creates a fresh, clean style that showcases butterscotch and toffee for an ultra-smooth taste that the company believes will be enjoyed by whisky experts as well as those who have never tried Scotch Whisky.

David Beckham shares Diageo’s belief in quality over quantity and is taking the lead in the promotion of responsible drinking, which lies at the heart of Haig Club.

Haig Club began rolling out in duty free outlets across the globe from October with a recommended retail price of £40 GBP / $62.50 USD for a 70cl bottle.

David Beckham Raises a Toast to Travellers in Cannes With New Haig Club added by Newsroom on October 29, 2014
View all posts by Newsroom →