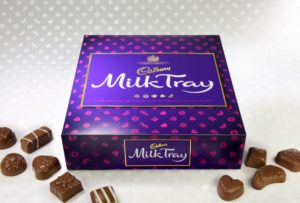 Cadbury Milk Tray has revealed new packaging to coincide with the brand’s centenary as it attempts to re-establish the chocolates as a thoughtful and special gift choice.

Working with Design Bridge, Cadbury sought out public opinion ahead of the re-design and discovered that there was still an underlying love for the chocolate brand.

“Despite being one of their oldest and best known brands, Cadbury Milk Tray had recently been overshadowed by competitors,” explained Gemma Roche, client director at Design Bridge who pointed to the brand’s old-fashioned packaging and its reputation of being a “last-minute gift” as the main stumbling blocks. 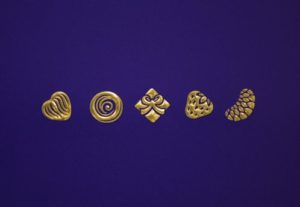 By asking people’s opinions Design Bridge found the shapes of the chocolates “sparked the fondness that people had for Cadbury Milk Tray” and worked from there to create hand-drawn illustrations based on the five most iconic chocolates shapes and textures, creating ‘hallmarks’ for the brand.

Benazir Barlet-Batada, marketing manager at Mondelēz International, said of the new packaging: “[It] not only restores a sense of specialness, it builds on it and reaches out to a younger audience. We hope this will keep Cadbury Milk Tray alive for the next 100 years and beyond.”

The pink accent colour from the previous packaging has been retained to highlight the pattern and give the brand a fashion-led, feminine appeal. Incorporated into the design is a gift tag which brings together the brand mark, royal warrant and the chocolate-shaped hallmarks. 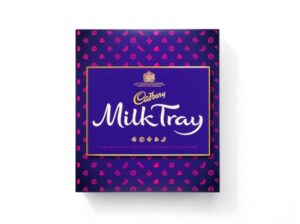 Graham Shearsby, chief creative officer at Design Bridge, added: “Cadbury Milk Tray now embraces what people love most about the brand. For the first time in 100 years we’ve brought what’s inside the box to the fore.”

In addition to the new packaging design plans are afoot for the first Cadbury Dairy Milk campaign in a number of years.

From 1968 to 2003 the brand was advertised by the ‘Milk Tray Man’, a James Bond-style figure who undertook daunting challenges all to deliver a box of Milk Tray. The original tagline was ‘And all because the lady loves Milk Tray.”