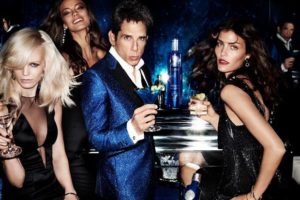 The limited edition Cîroc bottle is blue with a hint of iridescence, and has apparently been inspired by fictional supermodel Zoolander’s ‘Blue Steel’ pose – a look that couples pursed lips with a steely gaze.

Diageo’s partnership with Paramount Pictures comes ahead of the release of Ben Stiller’s sequel to 2001’s Zoolander, which goes on general release in February, 2016.

Testino, who was creative director on Cîroc’s ‘On arrival’ campaign, was instrumental in the design of the bottle, which comes in a standard 70cl format, as a 1.75cl bottle available in select bars, and a 3l collector’s edition. All formats have been designed to be, in the famous words of Derek Zoolander, “really, really ridiculously good-looking”.

Sam Reader, reserve marketing director Europe at Diageo, said: “Zoolander 2 is set to be one of the biggest blockbuster films of 2016 so this partnership is a hugely exciting project for Cîroc and for our customers both in the on and off-trade. The super-premium spirits market is growing fast as consumers are willing to spend more on luxury drinks and Cîroc is driving much of the excitement in the vodka category. This limited edition bottle is a fun addition to the range that will appeal to both fans of the brand and fans of the film.”

Testino added: “The Cîroc blue is a consistent colour throughout all shoot creative and ‘Blue Steel’ is of course Zoolander’s iconic pose, so that, together with the bottle design married seamlessly.”