By Newsroom on September 4, 2015Comments Off on Diet Coke Turns Fan Tweets into Artwork on Billboard in Times Square

Diet Coke is trying to drum up excitement for the struggling soft drink by turning fan tweets into artwork displayed in unexpected places such as in magazines, on jewelry, and even on a mural in New York City.

Called ‘ReTweets of Love’ and created by Droga5, the socially-driven campaign is meant to celebrate and surprise fans who show their love for Diet Coke on Twitter. 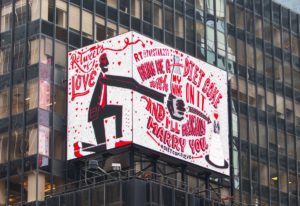 The campaign kicked off this week in Times Square where professional artists turned three fan tweets into artwork displayed on a billboard. From now until October, designers and illustrators will work with the brand to reimagine dozens of tweets.

Danielle Henry, group director of integrated marketing content at Coca-Cola North America, said: “We’ve been connecting with our biggest and most passionate fans through social media for years, but we felt it was time to return that love in way that’s as big as our appreciation. A simple retweet just isn’t enough for our loyal fans who love the great taste of Diet Coke.”

The soda brand will be sharing photos and videos on its Twitter page of the artwork developed throughout the campaign.

Diet Coke Turns Fan Tweets into Artwork on Billboard in Times Square added by Newsroom on September 4, 2015
View all posts by Newsroom →