By Newsroom on April 7, 2014Comments Off on Doritos Recruits Joe Hart for Latest Campaign

Doritos has teamed up with Joe Hart to offer fans the chance to take a penalty against the goal keeper as part of its latest campaign.

The PepsiCo owned brand is inviting groups of friends to upload a video of themselves by 18 April showing off their football skills, after which eight teams of finalists will be selected to compete to be in the final two to take a penalty against Hart and win a trip to Europe. 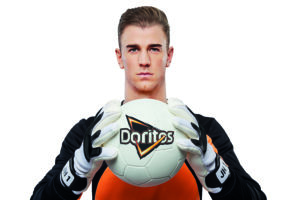 The two teams that reach the final will feature alongside the England goalkeeper in the new Doritos TV ad, which airs across the UK on 24 May.

Doritos Brand Manager, Taylor Jenkins commented, “We are thrilled to be bringing people together in this exciting Mexican style challenge and having a No.1 goalkeeper like Joe Hart on board means now we will be creating a truly unforgettable moment for friends to share during this exciting summer of football”.

The campaign will be supported by an on-pack promotion offering consumers the chance to win £100 by scoring penalties in an online game.