By Newsroom on January 3, 2017Comments Off on Eight Partnership HK Designs Bakery Concept in Japan Around the Traditional French Boulangerie 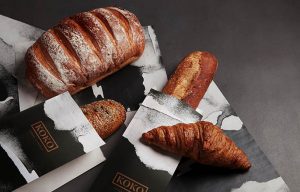 Eight Partnership Hong Kong has unveiled a new café bakery concept in the northern Japanese ski resort town of Niseko. Located at the heart of the village, Koko is a modern take on the traditional French boulangerie, infused with a Japanese aesthetic.

Eight developed the concept and creative direction for the visual identity and the interior design of Koko, whose name is derived from the last character in the Japanese for “Niseko.” 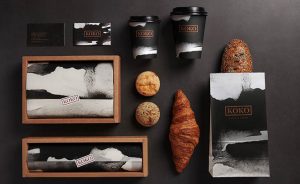 The brand identity, used in the logo and on packaging, includes an ink pattern inspired by the fluidity and transformative nature of water.

The restrained colour palette, another Japanese influence, is carried through to the interiors which are minimalistic and monochromatic with distinctive copper accents to heighten the sense of warmth within the space.

Koko also features an openly visible oven and European coffee machine to add a visual element to the aroma of freshly baked baked and pastries and barista grade coffee.

Eight Partnership HK Designs Bakery Concept in Japan Around the Traditional French Boulangerie added by Newsroom on January 3, 2017
View all posts by Newsroom →