By Newsroom on April 18, 2016Comments Off on Everest Brand Solutions Reveals why Parle BakeSmith is the Real Marie

Parle has a great tradition of taste, nutrition and quality. The brand has grown from strength to strength by concentrating on consumer tastes and preferences, ever since its inception.

Based on the consumer insight that there are various Marie biscuits but no one knows the original Marie and its original taste, Parle has now rediscovered Parle BakeSmith Marie making it its yet another endeavor to bring the best to the consumer.

The discovery of the original Marie recipe can be explained through Mrs. Smith’s story. Mrs Smith was a beautiful young lady who lived in the countryside of London, who was a beautiful young lady living in the countryside of London. She was poor and made her living baking biscuits. One day, she thought of experimenting with her biscuits and went on to bake a unique biscuit now popularly known as ‘Marie’. Her small bakery soon became very famous as Londoners started queuing up for her rich tea biscuits. These biscuits gained popularity globally. Acknowledging her craftsmanship, Mrs. Smith went to be referred as ‘BakeSmith’ by the Englishmen. Parle BakeSmith Marie is a product of this recipe and the same is delightfully communicated through the Campaign TVC. 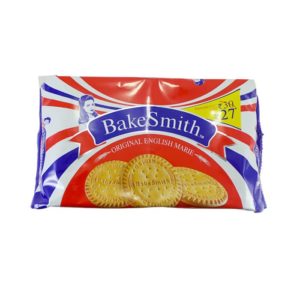 Krishnarao Buddha -Deputy Marketing Manager, Parle said, “Parle had its fair share of struggle in the Marie space for many years for lack of differentiation till it rediscovered the Original English Recipe. With a great brand name and an international looking packaging topped with the Original English Recipe, we expect to meet the prospects expectations. To communicate the unique proposition, we mandated Everest Brand Solutions to tell the story in a most interesting manner. We are delighted with the outcome and we are confident to achieve our set objectives.”

Commenting on the Campaign, Pramod Sharma – Executive Creative Director (West) said, “Great brands are all about great stories. We had a lovely story to narrate and change the way Marie Biscuits are advertised. The script is simple. The treatment is truly international. I’m very happy with the film. It positions Parle BakeSmith as a premium offering in a cluttered scenario. The film is an outcome of months and months of hard work. Every step was a challenge. We had to find the perfect face for Parle’s Founder and Mrs. Smith’s character. We had to get that era right, beginning from costumes, location, props, vehicles and lot of other things. I would really like to thank my client Parle, the director and the production house who have helped us deliver a great film.”

Aradhana Bhushan – Vice President, Everest Brand Solutions said, “The brand objective of BakeSmith is to uniquely own the Classic Marie space. Hence the campaign was built on the route the Original English Maire.”

Everest Brand Solutions Reveals why Parle BakeSmith is the Real Marie added by Newsroom on April 18, 2016
View all posts by Newsroom →