Partners for 22 years, evian and BETC Paris have set their latest film on an exotic, slightly rugged beach, treating the ears as well as the eyes with a cover of the classic Beach Boys hit “Kokomo,” performed by Lilly Wood and The Prick.

In this short film, a surfer falls when taking on a wave, then wakes up on a beach surrounded by stylish, cool, and incredibly young surfers – which might have something to do with the fact that the only bar on the beach is serving evian. Staying true to the “Live Young” signature, the film reaffirms evian’s vision of youth: a positive and universal value and openness to the world and the unexpected, regardless of age.

“Through the Baby Bay campaign we wish to encourage consumers to embrace evian’s Live Young philosophy,” said Antoine Portmann, General Manager, Danone Waters of America. “There is an active energy inside each one of us, and we need to ‘water’ it every day. This is what we call the evian effect – drinking pure water from the source keeps you living young in mind and spirit.” 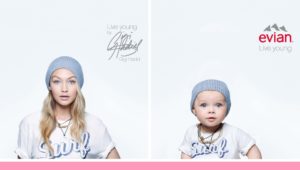 In the United States and Canada, evian has partnered with supermodel Gigi Hadid to help bring the evian effect to life. Gigi will be featured in out of home ads dressed as a surfer alongside her baby lookalike. These ads will be prominently displayed in the New York, Los Angeles and Toronto markets.

“I’m so excited to partner with evian,” said Gigi Hadid. “Like evian, I believe that living young has nothing to do with age and everything to do with a healthy mind and spirit, which I feel are the cornerstones to a life well-lived. evian and I strongly believe in the importance of self-expression and young energy.”

Rounding out the campaign is virtual reality application designed by Versus Fully Tailored Creation in conjunction with Quiksilver. The app presents an immersive 360 degree experience inside a wave allowing users to put themselves in the wetsuit of a baby to perform iconic surfing moves. The app is available for download at Google and Apple.

Packs and bottles will also display images of surfers juxtaposed with their baby selves to further drive home the evian effect.

In France, the global campaign will be featured at the legendary Parisian concept store Colette where customers can purchase three baby surfer t-shirts, as well as special edition flip-flops for adults that leave a baby footprint in the sand.