By Newsroom on January 20, 2014Comments Off on Gary Lineker Accosted in Walkers Giveaway Ad

Walkers launched its biggest ever giveaway of £1million as it brought back its hugely successful Do Us A Flavour campaign.

The ad, which accompanies the campaign first aired on 17th January, saw Gary Lineker accosted by excited members of the public, eager to enter their flavour suggestions. Walkers is challenging everyone to suggest a new great-tasting flavour combination to be in with a chance of becoming the UK’s first flavour millionaire.

The ad, created by Abbott Mead Vickers BBDO, sees Gary going about his normal day, but everywhere he goes, he is hounded by people all desperate to tell him their flavour suggestions. When he goes for his morning coffee the barista sprinkles the words chilli and chocolate on his latte. Next, he’s sat beside a man dressed as a chicken on the tube and on the street, he’s even handed two pigs in blankets. 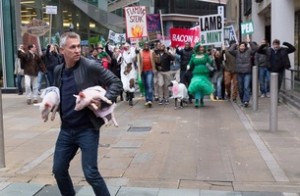 As Gary is day gets even more confusing, policemen turn up to stop the masses on the streets only to protect him with shields wielding the flavour suggestion beef stew. As it all gets too much we see Gary faint amongst the crowd. As he wakes up in hospital he looks up to see the nurse draw the curtain with her flavour suggestion of cheese and grape.

Pete Charles, the marketing director for Walkers said: “It is really exciting to bring Do Us A Flavour back to the British public. With the £1million prize ñ the biggest prize Walkers has ever given away – and the scale of social media today, we have no doubt that the nation will go wild coming up with flavour ideas.”

The Walkers Do Us a Flavour campaign launched on the 3rd January 2014 and has so far seen over 40,000 people entering their flavour suggestions. To submit a flavour idea consumers can go to here, pick one of six home grown ingredients as a base and then create a flavour to be in with a chance of winning Walkers biggest ever prize.

A panel of experts will whittle down the entries to find the lucky six finalists whose creative flavour suggestions will be produced by Walkers and made available for sale. It is then in the hands of the public to decide which flavour they would most like to win. The five runners up will win £10,000 each and one winner will win £1million.