By Newsroom on April 14, 2016Comments Off on Gatorade & TBWA\Chiat\Day LA Prove That ‘The Best Fuel The Best’

The latest Gatorade advert from TBWA\Chiat\Day LA – The Best Fuel The Best – explores the competitive nature of professional football. The ad features South America’s finest, as Argentina’s Lionel Messi (Barcelona), Chile’s Alexis Sanchez (Arsenal) and Brazil’s Hernanes (Juventus) and Philippe Coutinho (Liverpool) are driven to push themselves to new heights on the pitch through a determination to outdo one another. 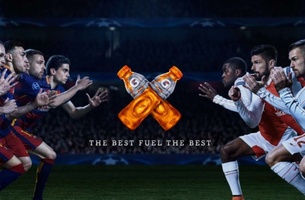 The tagline: ‘The Best Fuel The Best’ thus has an intelligent double-meaning in referring both to the competitiveness of rival footballers on the pitch, and the role of gatorade in literally fuelling them off it. The high-profile presence of Messi appears to be a winning formula for the agency, as the global football icon also starred in their last advert in February, generating nearly 500,000 views already.

The campaign was launched across several global markets recently, to coincide with the Champions League Quarter-Finals, which incidentally saw Barcelona and Messi unexpectedly knocked out.

Gatorade & TBWA\Chiat\Day LA Prove That ‘The Best Fuel The Best’ added by Newsroom on April 14, 2016
View all posts by Newsroom →