By Newsroom on July 25, 2014Comments Off on Genius Gluten Free #ToastTheChampions of the Commonwealth Games 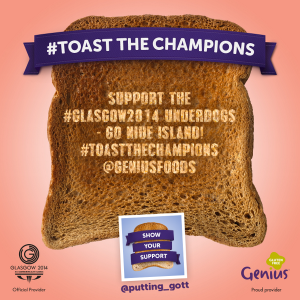 Genius Gluten Free, the official supplier of gluten-free baked products to the Commonwealth Games, has invited the public to #ToastTheChampions by sending encouragement on digital slices of toast.

The campaign, created by Maynard Malone, will automatically scrape social media references to #ToastTheChampions and generate an @reply with the branded toast, using both human and digital moderation.

Mairi Laidlaw, marketing manager at Genius, said: “We are delighted to have been named official provider of Gluten-Free Baked Products to the Commonwealth Games this year when they are hosted in Scotland, where Genius Foods is headquartered. We tasked Maynard Malone with providing a creative, but simple mechanic to communicate the benefits of gluten-free products to a wide audience, and are excited to see the campaign go live this week.”

During the Winter Olympic Games, sponsor McDonalds invited the public to send messages of support to athletes and teams competing in Sochi by using the hashtag #CheersToSochi.

Genius Gluten Free #ToastTheChampions of the Commonwealth Games added by Newsroom on July 25, 2014
View all posts by Newsroom →