By Newsroom on February 3, 2014Comments Off on GreenVale’s ‘Pretty Perfect Potatoes’ make their TV Debut

Leading potato supplier GreenVale is ramping up support for its fresh potato brand with a £1.5m TV advertising campaign, which goes on air from Monday, February 3.

The campaign, created by Aesop Agency, runs for five weeks on all key stations including ITV, Channel 4 and Sky. 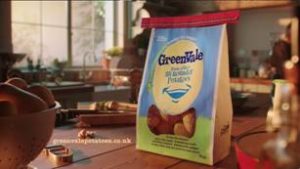 The 30 second advert was produced by the same production company that made the much admired John Lewis Christmas ad and is entitled ‘Potatoes that speak for themselves’.

Like GreenVale’s consumer print campaign that ran last year, the TV ad uses humour to engage with the audience and project the down-to-earth personality of the brand.

The creative features two animated potatoes chatting to each other in an imaginary home inside the GreenVale potato bag, musing on how they have been specially selected for their superior taste and that their paper bag keeps them fresher for longer.   The chat swiftly escalates into a witty tongue- twister with the two characters agreeing that they are ‘pretty peerrrfect potatoes, picked and packed in paper.’

Leon Mundey, Head of Marketing for GreenVale, said: ‘In the two years GreenVale Potatoes have  been available, we’ve been overwhelmed  by the positive response we’ve had from consumers and we have developed a really loyal consumer following.   We believe that this ad, which is really good fun but which also communicates our key messages of taste and freshness, will deliver a real step change in consumer awareness and growth for the brand.’

The advertisement will have extensive coverage with a media plan delivering a reach of 73% of the target audience, who will see it an average of 6.5 times.

GreenVale All Rounder Potatoes were launched in February 2012 and are now available nationally through Tesco stores, Ocado and Booths. Since the launch, over a million consumers have bought the brand.

The TV campaign comes close on the heels of a decision to extend the GreenVale brand with the launch earlier this month of a GreenVale Jacket Potatoes pack – four larger spuds specifically picked for baking – which are also available in Tesco.