Grey Goose Inspires Others to Pursue Their Passions in New Campaign

By Newsroom on October 8, 2013Comments Off on Grey Goose Inspires Others to Pursue Their Passions in New Campaign

Grey Goose vodka launched Fly Beyond to tell the remarkable story of how its creator defied expectations in France and throughout the spirits world to create a vodka that would set a standard of luxury in the super premium category.

The global integrated marketing campaign of Fly Beyond brings to life the compelling story of the making of Grey Goose vodka and the extraordinary journey of its creator François Thibault, trained as a Cognac Maître de Chai (cellar master). Through stunning imagery and storytelling, the campaign showcases the field-to-bottle provenance of Grey Goose and the challenges faced by François in his quest to create The World’s Best Tasting Vodka.

Sophisticated consumers now, more than ever, care deeply about where the products they enjoy come from. They value quality, style, authenticity and craftsmanship, and they want to know the story of their favorite brands.

“In the beginning, I was considered a maverick, even an eccentric, for trying to make vodka in historic Cognac, France, from wheat no less. There were many naysayers and skeptics, and all were waiting for me to fail, but I knew I could prove them wrong and create a product that tasted unlike anything available,” said François. “I’ve worked hard to create a spirit of outstanding quality and character. It is the world’s best because it is made like no other and feels exceptionally smooth in a dry martini or in other cocktails.”

The son of a wine grower, François was immersed from an early age in the craft of fine wine and spirits making. He later joined a leading Cognac house, where he received his formal instruction and began an apprenticeship of seven years under the tutelage of a Maître de Chai, until he earned the same title in 1992.

François developed a passion for blending extraordinary spirits. His vision was to create the world’s best-tasting vodka from an unlikely source — wheat from the Picardie Region, known as the “bread basket” of France.

François selected only the finest soft winter wheat from Picardie, using the whole grain to create his spirit, and distilled it only once using a continuous column distillation process designed to transfer into Grey Goose the quality and character of the wheat. He then masterfully blended it with pure spring water, naturally filtered through limestone, from the village of Gensac-La-Pallue in the Charente Valley near François’ place of birth.

To this day, François oversees the crafting of Grey Goose vodka and personally tastes every batch. His exacting standards and artisanal touch, combined with more than 550 daily quality checks, ensure an uncompromising process from field-to-bottle, so that wherever it is served Grey Goose lives up to its reputation for exceptional quality.

The Fly Beyond campaign ushers in the brand’s most powerful integrated marketing effort to date. Fly Beyond will be supported by 30-, 60- and 90-second television advertisements directed by award-winning filmmaker Nicolas Winding Refn, together with print, outdoor and digital executions. Fly Beyond and the story of Grey Goose vodka also will be brought to life through cutting-edge experiential and online programs that will allow consumers a deeper level of engagement with the story.

“Fly Beyond is more than a campaign for us. It is two words that capture the spirit of the brand’s creator and the spirit of our drinkers. With the launch of the campaign, we are for the first time telling the amazing story of how this peerless product was created,” said Lyle Tick, Senior Global Category Director for Grey Goose vodka.

“This campaign gives people something new to discover about a brand they thought they knew and helps them understand why Grey Goose does, in fact, Fly Beyond. We hope that by sharing our story, Grey Goose will inspire others to pursue their own passions and Fly Beyond themselves.”

The Fly Beyond campaign launcheed in the U.S. on October 7, and will subsequently roll out to other countries over the next year. Through 3-D technology, dynamic digital billboards will be synchronized today to create the illusion of flying geese through the epicenters of New York City and Las Vegas.

On October 14, one of the Times Square digital billboards will transform into an interactive display, where eligible consumers in the U.S. will be invited to submit their sky photos via Instagram, Facebook or Twitter for a chance for their picture to be featured as the background visual on the Grey Goose Fly Beyond billboard.

In a feat never before attempted, the billboard with the consumer image will then be photographed in Times Square and returned to the consumer who submitted it, so that he or she can further disseminate it. Other attention-grabbing outdoor activations include dynamic storefront takeovers in New York City’s SoHo neighborhood and its financial and meatpacking districts. 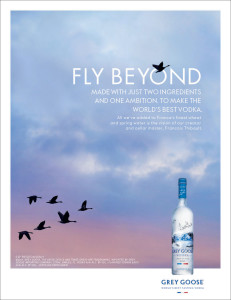 Making its YouTube debut on October 17 will be the Fly Beyond Immersive Film, a first-of-its-kind interactive experience made in partnership with YouTube. This cinematic film will take viewers on a journey from the origin of Grey Goose in Cognac to the cutting-edge of modern, handcrafted mixology. In addition to telling the story of how François revolutionized the world of premium vodka, the immersive film will include personalized mixology sessions that deepen the story and enable the viewer to explore a wide range of Grey Goose cocktails in unexpected ways.

Following the campaign launch, Grey Goose Fly Beyond comes to life as a four-day, pop-up experience, known as The Boulangerie. Opening in New York City’s West Village from October 15-18, the interactive experience will offer select guests the opportunity to meet François as part of an exclusive behind-the-scenes look into the making of Grey Goose vodka.

Behind a series of secret doors within the Boulangerie, guests will be treated to a multi-sensory field-to-bottle experience where they will learn about the brand’s heritage, including what is so special in the regions of origin of Grey Goose and of its ingredients and how they are sourced, milled, blended, produced and distilled. Finally, they will land in a vintage-inspired speakeasy serving up bespoke Grey Goose martini cocktails made to guests’ unique tastes.

Grey Goose Inspires Others to Pursue Their Passions in New Campaign added by Newsroom on October 8, 2013
View all posts by Newsroom →