By Newsroom on June 10, 2016Comments Off on Grolsch Launches “Unconventional by Tradition Since 1615” Campaign 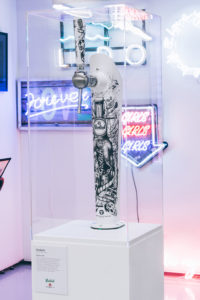 Molson Coors, one of the UK’s biggest brewers, has today announced the first on-trade elements of Grolsch’s new multi-faceted campaign “Unconventional by Tradition since 1615.” A new, limited edition font and glassware will be available to customers in the on-trade this month.

The “Unconventional by Tradition since 1615” campaign heroes the brand’s essence of originality and its belief that an open-minded, unconventional approach to life is what creates the most interesting, progressive and original ideas and innovations.

Grolsch has teamed up with award-winning Brighton-based art collective I Love Dust to create the new font, which is white with an illustration of the iconic Grolsch bottle surrounded by depictions of food, music and film – a reflection of the brand’s strong connections to all three. The font officially launched at the Other Art Fair in April, displayed on a plinth as a work of art.

The image of a fork reflects the year the utensil became mainstream – 1615 – the year Grolsch was created. Illustrations of musical instruments, cassettes and vinyl represent the brands’ strong link to music, notably the 1980s craze of swing top bottle shoes, coined by popular pop band Bros. Images of popcorn and film reels reflect Grolsch’s link to the arts, with the brand holding the title of Official Beer Partner for the prestigious BAFTA Awards for almost three years.

The limited edition font will be available exclusively in selected on-trade outlets across the country from June, with 600 in total being released. Grolsch’s three new limited edition glassware will also be released in June, and will feature one of three designs by I Love Dust inspired by music, film and food. 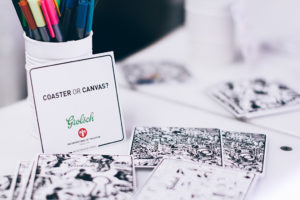 Ali Pickering, Brand Director Portfolio at Molson Coors UK, comments: “Grolsch has been inspiring originality since 1615, with its iconic swing top bottle and brewing excellence standing the test of time. The collaboration with I Love Dust brings the brand’s link to music, Film and food to life, and this unique tribute to the brand’s heritage demonstrates how Grolsch is dedicated to pushing the boundaries and celebrating originality.”

This summer, Grolsch will also be releasing colouring-in coasters with accompanying pen pots which will be on offer in participating on-trade outlets to encourage engagement at the point of sale. These additional materials will be rolled out alongside the limited edition font and glassware.

in 2015, Grolsch’s celebrated its 400-year birthday and ramped up its presence across the UK with its aptly named ‘Celebrating 400 years of Originality’ campaign which re-visited Grolsch’s impressive 400 years as an iconic international beer brand.

Grolsch Launches “Unconventional by Tradition Since 1615” Campaign added by Newsroom on June 10, 2016
View all posts by Newsroom →