By Newsroom on July 29, 2014Comments Off on Grolsch Lifts the Lid on Bluetooth Bottlecaps Providing Free Movies

Grolsch beer has launched a digital initiative called the ‘Movie Unlocker’, which provides free movies for customers who link bottles to their smartphones using cap-mounted bluetooth in a scheme designed by Russian app developer Heads and Hands.

Using a Bluetooth beacon in the bottlecap activated when tapped against a mobile device Grolsch has advanced its promotional campaign, which was previously more cumbersome requiring users to type and register serial codes.

Each beacon is protected by a sticker which blocks transmission until the bottle is opened – ensuring the movie has not been claimed or lost before reaching consumers.

When a bottle is opened, the beacon sends a signal to a device with a previously registered serial number and if these match, users can digitally unlock a movie of their choice. 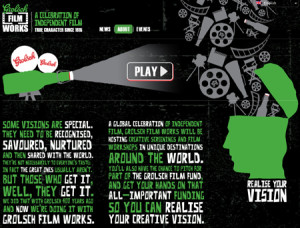 The caps are compatible with modern phones equipped with next-generation Bluetooth connectivity.

Aleksandr Semenov, CEO of Heads and Hands, said: “We were aware of a current campaign being carried out in Russia by Grolsch that allows consumers to enter promotional codes found on its bottles in to its partners websites.

“This enables people to access a movie for free. We liked this idea, but thought we could make the process a whole lot easier. So, we developed this new ‘one-touch’ technology for the bottles in order to facilitate the transaction in a single step.”

Heads and Hands is based in St Petersburg where it designs digital interfaces, web projects alongisde social media and mobile apps.

Grolsch Lifts the Lid on Bluetooth Bottlecaps Providing Free Movies added by Newsroom on July 29, 2014
View all posts by Newsroom →