By Newsroom on June 13, 2017Comments Off on Havas Says Adios to the ‘Most Interesting Man’ as it Passes on the Baton to Droga5

Heineken owned beer brand Dos Equis is parting ways with Havas in favour of Droga5, taking The Most Interesting Man in the World advertising campaign with it but not without one last hurrah from Havas.

Ending a decade long partnership in fitting fashion Havas published a full page ad celebrating the awards haul brought home by the eponymous debonair gent from 2008 right through to the present day as they pass on the baton in style.

“May you have equal success with your future partners. Stay thirsty. From your friends at Havas New York,” the ad reads.

“The ad we placed celebrates the campaign’s numerous successes, as well as the many people who have touched it through the years,” says Laura Maness, CEO of Havas New York.

“It’s a tribute to everything we’ve accomplished with Heineken USA, and we wanted to remind everyone, from the client to the marketplace, of the campaign’s far-reaching impact. Bravery is what made this campaign great, and bravery is what brands need to be successful in today’s market.” 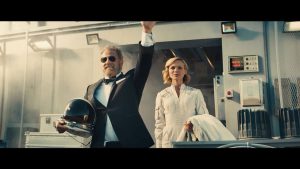 In wishing Droga5 every success Havas also published their telephone number apparently in the hope that marketers on the lookout for a new agency might be tempted to pick up the phone. They will be set for a disappointment however as the line simply connects to a recorded message saying that the team are ‘probably off doing something interesting right now’.

The Most Interesting Man in the World is credited as being one of the first ads to inspire its own meme.

Havas Says Adios to the ‘Most Interesting Man’ as it Passes on the Baton to Droga5 added by Newsroom on June 13, 2017
View all posts by Newsroom →