By Newsroom on January 27, 2016Comments Off on Heineken Claims Red Agency’s Mystery Push for the Australian Open

Heineken has announced it is behind a mystery activation via Red Agency, targeted at the Melbourne hospitality industry which has been taking place in the lead-up to and during The Australian Open.

Over the past two weeks, a number of bartenders around Melbourne have been left with some unexpectedly big surprises by a ‘mystery shopper’ who has roamed the city, handing out outrageous tips to staff who showed an understanding of the importance of serving a Heineken in the right way.

The activation forms part of Heineken’s strategy to ensure Heineken drinkers around Melbourne receive the best product experience while they enjoy the tennis at partner venues, illustrating a pledge to ensuring Heineken is served in the most premium way. Heineken’s mystery shopper, known as the Star Serve Guru, has visited numerous bars, pubs and restaurants around the Melbourne precinct, with dozens of ‘tips’ given out to deserving staff, including pairs of tickets to top games at The Australian Open, such as the Grand Final. The brand’s goal is to incentivise bartenders to maintain its high standards and ensure consumer receive the ‘Heineken Star Serve Ritual’. 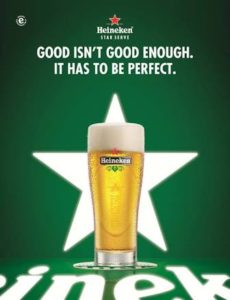 To bring the activation to life and showcase what Heineken classifies as ‘star service’, Heineken has created a content film which was shot in a number of popular Melbourne venues, capturing what happened when Heineken’s Star Serve Guru went undercover. Hidden camera footage shows how the Guru was served by bartenders, under the impression they were serving an ordinary customer, unaware their service was being captured on camera. Viewers can see exactly what staff needed to do to earn their reward – and how they reacted when they picked up their generous tips. The content film was produced by Monster & Bear.

Says Alessandro Manunta, marketing manager, Heineken Lion Australia: “Our product sits at the heart of everything we do and one of Heineken’s core brand commitments is to go the extra mile to ensure our international premium beer is delivered to consumers in the best possible way. We are always looking to try new things and we want this activation to encourage all bar and wait staff to make sure they are providing the best service to anyone that orders a Heineken. The Star Serve Guru now moves his attention to the rest of the country but no doubt will be back to Melbourne soon. You won’t know where, or when, but as long as you continue to deliver the 5 Step ‘Heineken Star Serve Ritual’ you could receive the ultimate tip.”

The ‘Star Serve Guru’ activation coincides with Heineken’s 20th anniversary celebrations of its sponsorship of The Australian Open and its significant brand presence during the tournament. Outside of the Grand Slam Oval where Heineken’s core activation is centred, multiple activations are continuing to take place at a number of venues across the city as Melbourne celebrates its annual festival of tennis.

Heineken Claims Red Agency’s Mystery Push for the Australian Open added by Newsroom on January 27, 2016
View all posts by Newsroom →