By Newsroom on August 27, 2015Comments Off on Heineken Stuffed Rugby Legend Jonah Lomu Into A Tiny Box

The recently launched global campaign promised to give the Rugby World Cup nation’s fans a chance to flip the coin at the beginning of their respective games. ROTHCO and Heineken have launched online hidden-camera film ‘The Jonah Machine’ to kick off the ensuing Irish activation, encouraging rugby fans to take part and win a chance to flip the coin at Ireland’s pool games and quarter finals. 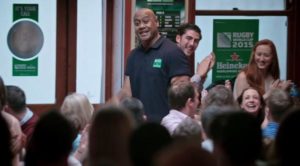 Filmed by hidden camera in a pub in Dublin, ‘The Jonah Machine’ documents an elaborate prank where the unsuspecting Dubliners receive unusual prizes on a bespoke Heineken games machine. Unbeknown the pub’s patrons, All Blacks rugby legend Jonah Lomu is hiding inside the machine, personally signing prize rugby balls with a special message for the unwitting recipients. Completely unaware of the set-up, punters are baffled by their personalised prizes – that is until Jonah’s replacement, ex-Ireland player Shane Horgan turns up to relieve his fellow sportsman!

Ray Swan, ROTHCO’s Senior Art Director, comments: “The idea behind the ‘It’s Your Call’ campaign is a celebration of the unpredictable nature of rugby. Standing shoulder-to-shoulder with Rugby’s elite for the local campaign was an honour; putting them in a small box was the icing on the cake!”

Following the launch of ‘The Jonah Machine’, bespoke Heineken machines will appear in pubs and off licences across Ireland. The machines will allow Heineken customers to play to ‘call’ the toss of a coin. If they call it right, they get a prize. Prizes will range from RWC Heineken merchandise all the way up to the opportunity to flip the coin at the Irish pool games and quarter finals.

Heineken Stuffed Rugby Legend Jonah Lomu Into A Tiny Box added by Newsroom on August 27, 2015
View all posts by Newsroom →