By Newsroom on July 17, 2017Comments Off on Heineken’s New Campaign Proves F1 is #MoreThanARace 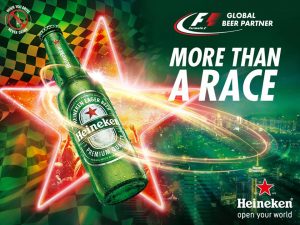 Heineken officially launched its global Formula 1 (F1) partnership in 2016 with two new campaigns; When You Drive, Never Drink and More Than A Race. Both campaigns were rolled out across multiple markets on TV and digital platforms in 2016 and will continue to air throughout 2017.

Heineken is the F1 Event Title Partner of three Formula 1 Grands Prix (GP) in China, Italy and Mexico. It will also have a significant presence at six additional Formula 1 Events chosen by Heineken and Formula One Management. Heineken is the exclusive Global Beer Partner of Formula 1 and has substantial pouring, activation and access rights across the majority of Formula 1 Events in the FIA Formula One World Championship. The partnership gives Heineken the right to activate worldwide and throughout the calendar year. Heineken is not visible on any Formula 1 cars.

More Than A Race, features former F1 driver and current TV commentator, David Coulthard. It centres on the insight that F1 is not just a two hour race, an F1 race weekend is a 72 hour spectacle of glamour and excitement, taking place in some of the world’s greatest cities. The commercial – The Tutorial, will continue to air during 2017, having been launched in mid-September 2016, created by Publicis Italy.

Breaking the stereotype that drivers are not real athletes with real examples of what they go through in each race, such as driving in temperatures over 50°C and being so fit they can handle more g-force than a space shuttle.

Tackling the misconception that F1 is just about driving around in circles. A lot more goes into the race so drivers can perform at their best, such as cars getting adjusted every 20 minutes.

David Coulthard shows that although there is a lot of innovative technology involved, it is the people and culture around the Grands Prix that make it so special.

Heineken created additional video assets in July 2017 to complement the global digital campaign that looks to further establish the brand’s position as a global sponsor of F1 and to open up the world of F1 to new audiences.

The next stage of the More Than A Race campaign sees David Coulthard one again, this time showing viewers an unexpected side of the sport through a series of short videos – breaking common stereotypes around the sport to show fans and viewers that there’s much more to a Formula 1 race than just fast cars. 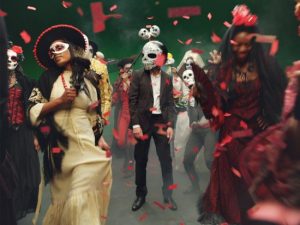 The digital campaign is comprised of three hero films, each exploring a major area of misconception around F1.

From the athleticism of the drivers to the cars and tech, to the way a city comes to life when a Grand Prix is in town these short, surprising, fact-based films aim to show the breadth of what Heineken means by More Than A Race.

Anuraag Trikha, Global Heineken Brand Communication Director says “Our aim with these films was to show people another side of F1 that is unexpected. There is more to F1 than people think and as the exclusive Global Beer Partner of F1 we are in the best position to be doing this through our global reach and audience.”

“With the hero films of More Than a Race, we’re bringing to life our brand essence ‘Open Your World’ by opening up the sport of F1 to new audiences in a new and engaging way. We are also bringing the world of F1 to a new digital platform where our target audience or millennials are watching. It’s new and innovative and highly engaging content, and we hope consumers around the world see F1 in a different light,” he continues.

“For last year’s initial launch of More Than a Race, racing legend David Coulthard introduced a first-timer to the delights of the F1 experience. Now that we’ve established what the F1 world is about, the new films continue taking the viewers on this journey by giving them access to unexposed sides of the sport.” 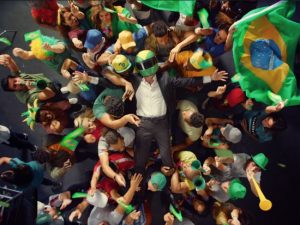 Nicolas Roope, Executive Creative Director, POKE said: “Heineken wants to lift the lid on F1 and show that it’s More Than a Race. Who better than Heineken’s F1 frontman David Coulthard to offer fresh perspectives on the global phenomenon? This video series was conceived and crafted for mobile consumption, designed to grab attention and reward the engaged with new insights and visual spectacle.”

“The script beckons viewers to glimpse obscure and interesting stories behind F1, that tell a fresh story about this extreme phenomenon. Each story needed illustrating to convey each point, but we also needed pace and dynamism in the visuals, so camera play and creative transitions were used to inject this energy. We needed interest to be upheld as the insights unfolded, to prove to everyone that F1 is “More Than a Race,” concludedNicolas.