By Newsroom on September 9, 2015Comments Off on Heinz Drops ‘Healthy’ & ‘Snack’ From Baby Biscotti Marketing 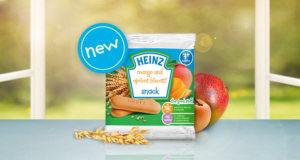 Heinz will no longer refer to its golden multigrain, chocolate and organic varieties of biscotti as ‘an ideal healthy snack for babies 7+ months old’.

It comes as a result of a complaint made to the Advertising Standards Authority by the Children’s Food Campaign which argued the products have added sugar as their second ingredient and, with 24g or more sugar per 100g, would be classified as ‘high’ in sugar and coded red for sugar under the government’s recommended front-of-pack nutrition labelling scheme.

Heinz has since agreed to drop any reference to ‘healthy’ or “snack’ from its marketing.

However, Malcolm Clark, co-ordinator of the Children’s Food Campaign, claimed Heinz’s changes are “merely cosmetic” after being “caught red-handed trying to mislead parents into believing sugary biscotti are an appropriate and healthy food to give to babies.”

He said marketers are now “simply using different wording to imply it is okay to give the sugary biscotti to babies in-between meals.”

“This case reveals the limits of existing advertising rules, the relative powerlessness of the regulator, and the impunity of Heinz to continue spending millions promoting sugary baby foods. That may be a satisfactory resolution for the ASA, but it is not for us, or the many health professionals, early years specialists and parents’ groups who support our campaign. We urge the Government to robustly address marketing and reformulation of less healthy food and drink in their forthcoming Childhood Obesity Strategy.”

Meanwhile, Heinz said it takes its responsibilities as an advertiser seriously.

“As soon as we were made aware that certain elements of our website copy may not have met the high standards we demand, we took immediate action to make changes. The matter was resolved to the satisfaction of the ASA.”