By Newsroom on August 20, 2013Comments Off on Heinz Launches ‘Full of Beanz’ Ad Push

Heinz has released a new TV ad reminding parents that, “for kids that are full of Beanz, it has to be Heinz.”

The 30-second ad focuses on the relationship between brothers, as younger Charlie struggles to keep up with energetic older brother Tom in games of hide-and-seek, cycling and football. 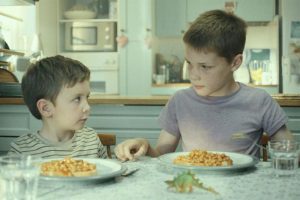 Despite the frustrating game of hide-and-seek and disappointing football match, Tom still says that Charlie is his best friend. At teatime, Tom is served a larger portion of beans on toast, but as soon as their mum’s back is turned, he gives little Charlie a forkful of his Heinz Beanz, because: “he just needs to grow him up a little bit”.

This teatime scene then cuts to a can of beans featuring the line “naturally high in protein”, and the end frame shows the inseparable brothers both sleeping on the lower bunk of their bunk bed.

The TV spot is part of a £4 million integrated marketing campaign that includes a makeover of the classic Heinz Beanz cans, which now feature ‘Heinz Full of Beanz’ labels, and a national radio campaign launching in mid-September.

The campaign will be supported by the Heinz Beanz UK Facebook page and in-store activity, including competitions with Sainsbury’s, Tesco, Morrisons and Asda.

The TV ad broke yesterday and Vizeum planned and bought the campaign.