By Newsroom on January 20, 2014Comments Off on Hershey’s teams with 3D Systems to create 3D printed chocolate 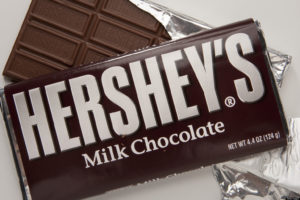 Hershey’s is set to team up with 3D Systems in order to create 3D printed chocolate as well as other sweet treats.

The American confectionary company has not revealed when the products may be available to the public, but the news comes shortly after 3D Systems unveils its food-safe 3D printer at the Consumer Electronics Show in Las Vegas.

William Papa, vice president and chief research and development officer of the Hershey company, said: “Whether it’s creating a whole new form of candy or developing a new way to produce it, we embrace new technologies such as 3D printing as a way to keep moving our timeless confectionery treats into the future.”

According to The Telegraph, the 3D food printer will work by melting the chocolate, tempering it and creating layers as thin as half a millimetre at a time.

Hershey’s teams with 3D Systems to create 3D printed chocolate added by Newsroom on January 20, 2014
View all posts by Newsroom →