By Newsroom on November 14, 2016Comments Off on Home is Where the Heart is as Lidl Ireland Launches Christmas ‘Homecoming’ Campaign

Lidl Ireland has launched its 2016 Christmas campaign with ‘Homecoming’, a heart-warming TVC that reminds us that it’s the people, not the presents, that are most important at Christmas with the line ‘Share more special moments this Christmas’.

Having collaborated with Lidl on the retailer’s three previous Christmas campaigns, creative agency Chemistry approached this year’s brief by placing the Irish family Christmas at the heart of the campaign. Separating the product elements of the campaign from the brand elements, the film is centred upon the overwhelming sense of place that’s relevant to us all at Christmas time. 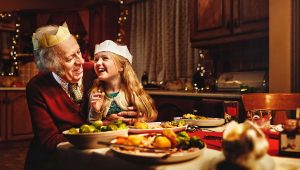 The film sees a grown family come together to recreate Christmas for their father in their old family home. Tucked away in the country, the house has been left to fall into a state of disrepair and, coupled with the death of the their mother, the family are inspired to rally around and bring the old home back to life in time for Christmas. Taking the viewer on a journey, from clearing away the cobwebs to the arrival of the elderly father, it is when the snow starts to fall that Christmas really begins.

Juxtaposing the imagery, the soundtrack to the spot is a cover of Have Yourself a Merry Little Christmas by the young Irish artist Soak.

Mark Tuthill, Copywriter at Chemistry, comments: “This year there was an element of ‘how do we raise the bar’? This is a new concept creatively that asks; what does Christmas mean in an Irish context? The answer is spending time with family and friends, with Lidl facilitating the perfect Christmas at home. The sense of place was important, and an Irish Christmas is defined by the younger and older generations coming together under one roof is something that we set out to capture.

“Whilst there’s a reference to the product, the narrative isn’t diluted by explicit placement and a lot of credit must go to the client. It’s been a real collaboration as we explored at lots of different routes for the campaign but we all knew that this was the right script. It’s been fantastic seeing how we can go in an emotional direction for this film, and both ourselves and Lidl are extremely happy with how it’s come out.”

Audrey Farrelly, Account Director at Chemistry, comments: “So many Christmas campaigns can feel manufactured and insincere in the way that they attempt to pull on our heart strings, which is why we worked closely with Henry, who looks for a particularly realistic and natural style in his films. He shoots loosely, nothing is very contrived or set up, and there’s a lot of spontaneity between the actors, which makes for a natural final film in which your really get to know the family.”

On November 11, Lidl Ireland launched a teaser of ‘Homecoming’ on the company’s Facebook page and the campaign has already drawn a phenomenal reaction from the public.

Home is Where the Heart is as Lidl Ireland Launches Christmas ‘Homecoming’ Campaign added by Newsroom on November 14, 2016
View all posts by Newsroom →