By Newsroom on February 17, 2017Comments Off on Hula Hoops Launches “When it Comes to the Crunch” Campaign by BMB

Backed by a £4.5 million marketing campaign, BMB’s step-changing work marks a new strategy for Hula Hoops, in a push that will appeal to more households across the UK than ever before.

Breaking on 16th February, the campaign launches online first, kicking off with a 30″ film which then airs on TV from 2nd March, with additional online content supporting through the duration of the campaign.

The robber bursts in and tries his luck only to be met by a cashier with Hula Hoops on her fingers who delivers the line, “Sorry love. I’ve got my hands full”. From this point, the robber’s day takes a turn for the worse. The ad ends with the line “When it comes to the crunch…it has to be Hula Hoops”.

Directed by Jim Gilchrist, the film brings a comedic twist to the tense and high-octane world of bank robbery, bringing a bit of Hollywood to Wood Green through the anamorphic lens of the Director of Photography, Tim Maurice-Jones, of Lock Stock and Snatch fame.

The campaign will run initially for two months in February/March, returning for a further burst in August/September. This is the biggest ever campaign for Hula Hoops with TV, Social, Digital activity and in-store events all taking place across these periods. The main 30″ spot will be followed by series of extra scenes, also shot by Jim, which reveal to viewers what happens after the robber is outwitted by the cashier. 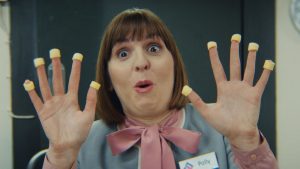 Finally, the agency has created content for skippable online media, where the cashier Polly is unable to “skip” because she has her hands full, thus putting YouTube audiences on the receiving end of a Hoops “hands full” brush off. While this all happens within the first five-seconds of the YouTube spot, there is a bonus for those who choose not to skip.

Jules Chalkley, Chief Creative Officer at BMB said: “Our latest campaign for Hula Hoops builds on natural consumer behaviour with the product and amplifies it to provide a brilliant brand platform that could run for a very long time. “Sorry, I’ve got my hands full” is a genuinely ownable piece of language for the brand that we can’t wait to have more fun with.”

Vijay Bhardwaj, Head of Marketing & Formats at KP Snacks, said: “Hula Hoops on fingers are a ‘hole’ lot of fun that we will continue to celebrate. This latest campaign dramatises the fact that no one wants their Hula Hoop break messed with – and now we have the perfect excuse to keep tucking into our Hoops – ‘You’ve got your hands full’!”

When approached for a quote, director Jim Gilchrist was unable to provide one, saying only “sorry, I’ve got my hands full at the moment.”

Hula Hoops Launches “When it Comes to the Crunch” Campaign by BMB added by Newsroom on February 17, 2017
View all posts by Newsroom →