Our poor eyeballs are being fried by our screen addiction. Apparently 63% if people in the EU are afflicted by digital eyestrain – it turns out that staring a pixels all day long is hard work. That’s why McDonald’s and their agency Isobar Poland decided to use their online ads to help consumers give their eyes a rest. 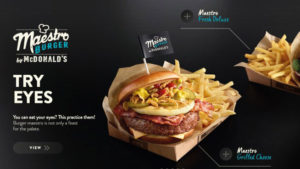 The website for the newly launched Maestro burger had a series of relaxing exercises that visitors could give their eyes a treat. Along with soothing the optic muscles of the country, it generated an average linger time of over 180 seconds.

So where did the connection between eye strain and burgers come from? “It came from the observation that the Maestro burgers do look impressive,” says Maciej Kozina, Deputy Creative Director at Isobar Poland. “They’re even served in a fancier way than the regular offering – it’s a burger that you eat not only with your mouth but also with your eyes. Since all of us work with screens the idea to address the issue of eye fatigue.”

The team really did their research to make sure that digital eye strain really was a problem.

“We went through some research papers on digital eye strain when going through a phase of ‘Is that an actual thing?’ Combined that with some statistical data from the US and EU we were certain that the problem is relevant and could be addressed by McDonald’s to deliver engaging communication. To get the execution right we dug in into some ophthalmology to figure out what exercises could be translated into the digital space. And we worked closely with OMD (McDonald’s media agency) to leverage Google Display Network and programmatic solutions to actually have that campaign brought to screens,” explains Maciej.

“In fact the project even started to have an effect on the team. It turns out that once you notice eye strain is a thing it becomes hard to ignore. As far as our own habits are concerned it’s a funny thing – it’s like you have something right in front of your eyes but you don’t notice it. So, this actually made us aware of the scale of the problem each person working in front of the screen could be facing. And during the campaign even some people from the office also signed up for the program.”