By Newsroom on February 4, 2016Comments Off on Jacob’s Creek Unveils ‘Made By Moments’ Films with Novak Djokovic

Jacob’s Creek in partnership with Cummins&Partners, has launched its new ‘Made By Moments’ campaign for 2016 with newly crowned six-time Australian Open Grand Slam winner, Novak Djokovic.

The campaign will roll out globally and activates across major tennis tournaments including US Open and China Open as part of Jacob’s Creek global tennis sponsorship platform.

‘Made By Moments’ features not only Novak Djokovic, but also his wife Jelena Djokovic. In the film series, Djokovic shares memories of great-shared dining moments that connect his family and cultural traditions.

In 2015, Jacob’s Creek told the authentic story of Novak’s determination.

Kirsty Muddle, chief innovation officer at Cummins&Partners said: “This year, we continue with a story that is closer to the brand. We know Jacob’s Creek consumers are engaged with the tennis, and we also know they love food. Beyond the taste of it, it’s the ceremony in serving it, the occasion it creates and the memories these occasions leave us with that Jacob’s Creek celebrates.” 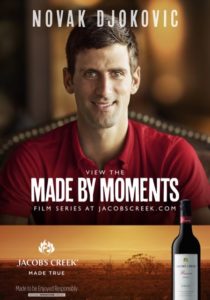 Filmed in Monte Carlo, the films recount Djokovic’s first date with his wife, Jelena. The more playful of the two films, the story reinforces Djokovic’s ‘real’ self as he shares the memory that will forever be a nostalgic joke for the couple. The other film tells the story of his Serbian heritage, where he and his family would gather and share a traditional dish called ‘Česnica’. Whilst the occasion centred around a meal, it was the coming together that really mattered to Djokovic.

‘Made by Moments’ forms part of Jacob’s Creek’s global campaign that celebrates the people, places and passions that go into crafting every bottle of Jacob’s Creek wine.

The launch, which coincided with the Australian Open, has rolled out with extensive activity across broadcast, digital, social, PR and retail globally.

Jacob’s Creek Unveils ‘Made By Moments’ Films with Novak Djokovic added by Newsroom on February 4, 2016
View all posts by Newsroom →