By Newsroom on March 5, 2014Comments Off on Jagermeister Launches New “JagerBonds” Mobile App

Jagermeister launches its first-ever mobile app that cures the Fear of Missing Out syndrome (FOMO) many people experience when they are unable to participate in a night out with friends. Millennials across the country have active social lives, and they enjoy sharing their experiences with their vast digital networks.

Jagermeister, the 7th largest premium spirit brand in the world and the number one selling imported liqueur in the United States, has finally found the solution with JagerBonds. The app transforms images and videos from multiple users’ social media posts into a video highlight reel of a groups’ night out with Jagermeister. For a spirit best known for connecting consumers with uncommonly great nights, this app is a digital first platform that connects consumers’ on and offline experiences. 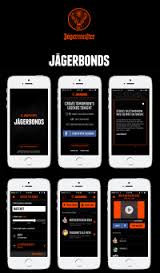 Celebrating the launch with a one-of-a-kind event experience, JagerBonds debuted last night at The Raven in New York City where guests toasted with music legend Q Tip, who provided the music for the evening. Attendees were among the first to use the app resulting in an inherently share-worthy highlight video of each users’ personal experience and “great night out with Jagermeister,” that can be uploaded on the users’ social platforms.

Keeping with the Jagermeister’s high-energy and social side, the app also allows uploaders to combine their individual night with other consumers and provides an innovative way for Jagermeister drinkers to capture the energy and feel of the time-honored Jagermeister night in a whole new way. While out having fun with Jagermeister, everyone involved in the Bonds can post photos and videos to Facebook or Instagram as usual—JagerBonds works in the background to compile the posts and pair them with songs from some of today’s hottest artists, including Fall Out Boy, Eli Young Band and Paul Oakenfold.

The app will also be active in a partnership with WOVEN in Austin, Texas at the intersection of both the Interactive and Music weeks at SXSW. The WOVEN House will be open for five days at Trinity Hall in the heart of SXSW. WOVEN will launch a truly interactive platform that appeals to every sector of the music and tech audience. With up to three different music acts each night, JagerBonds will be at the ready to share the experience with friends across the country.

JagerBonds is available for free download in the iTunes and Google Play stores to those of legal drinking age. Users connect the app to their Facebook and Instagram accounts, then invite the friends they are going out with to join uniquely coded “Bonds.”