The campaign is called ‘One Life/Live Them’ and was created by DLKW Lowe, which has handled the advertising for the Rémy Cointreau-owned cognac brand since November 2014. Havas handles the media planning and buying.

The 60-second TV spot shows Renner indulging in his varied passions – acting, singing, directing and renovating houses. It will break on TV in the US on 2 November. It will also run in the UK at a later date.

Renner said: “The story of how to live your life really resonates with me personally. I think to fully realise one’s potential you must take action, remain curious, embrace your failures, as they are gifts, and honour your successes with humility. We are all many things and cannot and should not be defined by one thing, which is truly awesome.” 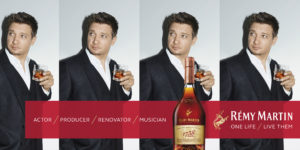 The campaign was created by Sean Bone, Ben McCarthy and Seb Housden, and shot by Ne-O through Stink. The TV spot will be backed by print and outdoor executions. Another spokesman for the brand is expected to be announced later this week.

Jamie Elliott, DLKW Lowe’s chief executive, said: “For too long the premium spirits category has represented the journey, often soulless, towards achieving a singular ambition. This campaign celebrates a new generation’s desire to enjoy life’s journey and express their multiple talents and in so doing redefine success. It has been a pleasure to develop it in partnership with the Remy Martin team.”

Rémy Cointreau suffered a 9 per cent dip in sales at the beginning of 2015, which was believed to be tied to China’s clampdown on bribery, meaning bottles of cognac could not be exchanged as business gifts. But the company’s second quarter revenues were more positive, falling only 3.2 per cent, to £205 million.