By Newsroom on November 25, 2013Comments Off on John Smith’s Races North With New Press & Radio Campaign 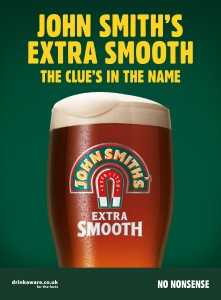 John Smith’s Extra Smooth, one of UK’s favourite ale, is ‘upping the ante’ with the launch of a new creative campaign that harnesses the brand’s links to horseracing and the smooth, No Nonsense credentials for which the beer is famous.

The year-round press and radio campaign, which will embrace brand ads and racing advertorials, will run via 20 regional newspapers and radio stations from November 2013 to the end of 2014.

“The new campaign will bring fresh impetus and grow brand saliency for John Smith’s, reaching more than 2 million of the brand’s primary target consumers across the North of England over the next year. Creative executions will be inspired during that time by the three credentials that underpin John Smith’s Extra Smooth: the brand’s superb smoothness and product quality, its No Nonsense attitude and its long-term association with top racing.”