By Newsroom on November 24, 2017Comments Off on Just Eat Embraces AR to Shower Facebook Users in its Food 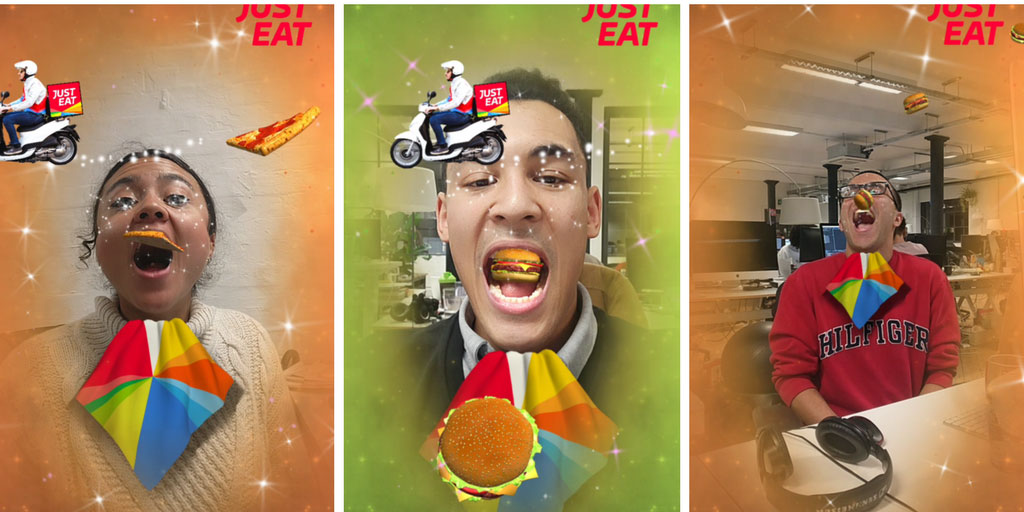 Online takeaway platform Just Eat has delivered an augmented reality feature to add another compelling dimension to its food offering, via Facebook.

The feature allows mobile users to beam food items into the real world via their mobile, a move that will help visualise the broad catalogue of items into the household of the consumer – a fun piece of activity that has the potential to help drive sales.

Using the feature allows the food to fly into the mouth of the user. The work also sees an appearance from the brand’s flying delivery scooter mascot from the TV ads.

By working with the social network’s AR studio, Just Eat has become one of the first UK companies in the tech industry to create such an experience, working in close conjunction with Byte London.

Ben Carter, UK marketing director at Just Eat, said: “Our Facebook AR experience is another way for us to bring the magic of our takeaway world to the British public and entertain them. From the breadth of cuisine choice to the ease and simplicity in placing an order, we’re putting our 28,000 restaurant partners – the magic makers – at the heart of our campaign. Nearly half the population are yet to order food online so we want to attract consumers to experience the Just Eat magic that we provide in their local area and ultimately, drive engagement and convert orders through the Just Eat Facebook app and website.”

The work ties into the the ‘Magical World of Just Eat’ campaign, which launched in October.

At launch Carter revealed: “Nearly half the population are yet to order food online so we want to attract consumers to experience the food magic that we provide in their local area.”

Just Eat Embraces AR to Shower Facebook Users in its Food added by Newsroom on November 24, 2017
View all posts by Newsroom →