By Newsroom on September 10, 2014Comments Off on Kellogg’s Special K Ad Canned After PepsiCo Complaint 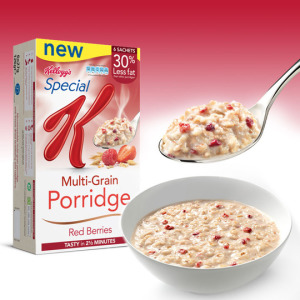 A TV ad for Kellogg’s Special K Multi Grain Porridge has been banned by the advertising watchdog after it drew 15 complaints, including one from FMCG giant PepsiCo, over claims it contained 30 per cent less fat than other porridges.

Kellogg argued that according to the EC Regulation on nutrition and health claims, marketers are able to make a reduced fat comparative claim if the product has been compared to a range of foods in the same category.

The company said that it had analysed data and sales information for all breakfast cereals available in major UK retailers and deduced that the average fat content of the top 75 per cent of porridge products was 7.84 per cent.

The Advertising Standards Authority (ASA), however said that it had not seen evidence from Kellogg that the products selected in comparison were representative of the category.

It added that as the claim was based on the fat content of Special K porridge and the other products when they were dry, none of them could be consumed as porridge.

For that reason the ASA ruled that the ad must not appear again in its current form.