By Newsroom on June 10, 2013Comments Off on Kent Lyons designs YO!Burger look and campaign

Kent Lyons has created the name, identity and a campaign for YO!Sushi’s new YO!Burger product, which launches on Monday.

The consultancy was invited to a tasting session of the new rice burger in March, when YO!Sushi head chef Mike Lewis demonstrated how he wanted to introduce a version of the Japanese dish to England, according to Kent Lyons partner Noel Lyons.

A roundel captures the brand name to signify that burgers ‘are almost perfectly round’ says Lyons who adds that the Taste The Future tag and bright pastel colours ‘emphasise how much fun they are’.

In store vinyls, menus, post-cards, and staff T-shirts have been designed, as well as a TV ad featuring music by Azealia Banks and Machinedrum. The TV ad will feature the tagline ‘It’s rice but not as you know it’

As YO!Burger is currently a limited edition product, Lyons says ‘We wanted the whole thing to be as bright and summery as possible. 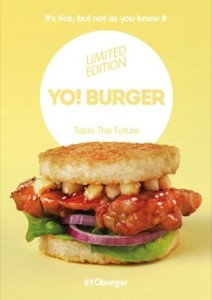 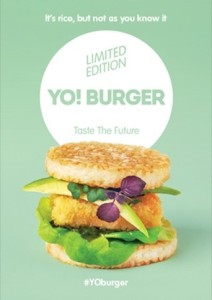 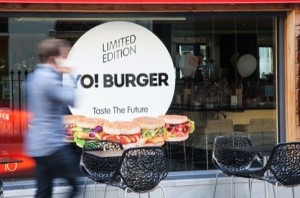