By Newsroom on January 21, 2014Comments Off on Kit Kat Returns to TV with Updated ‘Take a Break’ Spot

Kit Kat is back on Britain’s TV screens and reminding people to take a break with a campaign that features a high-speed car chase between cops and robbers.

The TV spot, which broke yesterday, opens with a docklands car chase. As the two cars turn into a warehouse, both vehicles stop and the occupants get out of their cars to chat about the traffic and share a Kit Kat.

Once they finish their snack, the police agree to give the masked criminals a head start before resuming their chase. The spot ends with the brand’s strapline, “Have a break, have a Kit Kat”. 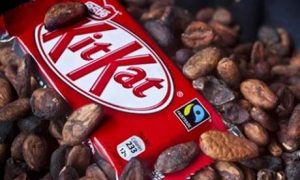 ‘Lock Stock And Two Smoking Barrels’ actor Vas Blackwood stars as one of the cops in the ad.

JWT London created the ad, which will be backed by online executions. The work was written and art directed by Miles Bingham and Kevin Masters, and directed by Ron Scalpello through Great Guns. Mindshare handled the media.

It marks the first time a Kit Kit ad has run on TV in the UK since 2011’s “crane” commercial.

Jon Lambert, the group marketing director at Kit Kat’s parent company Nestlé UK & Ireland, said: “We wanted Kit Kat to return to screens with a humorous campaign; reminding everyone not only of the importance of a smile in a break, but that Kit Kat is the chocolate bar to provide that.”

JWT has handled Kit Kat’s advertising since the brand was created, and devised its famous strapline in 1957.

Kit Kat Returns to TV with Updated ‘Take a Break’ Spot added by Newsroom on January 21, 2014
View all posts by Newsroom →