By Newsroom on May 16, 2016Comments Off on #KukureFamilyExpress – India’s First Food Train Sets Off

A first of it’s kind train is kick-starting its journey on May 16 from Delhi along with food enthusiasts Rocky Singh and Mayur Sharma hosting 40 different families over an 8-day journey across India.

In today’s hyper connected world, family time has lost itself to mobile screens and television. Keeping this core insight in mind and looking at the fact that families have traditionally connected over two main activities – food and travel, Kurkure is set to flag off the “Kurkure Family Express” – A specially assigned train by IRCTC which will travel across India with many Indian families aboard and leading them to rediscover and reconnect with each other over Kurkure.

A highly digitally driven campaign conceptualized by The Glitch and JWT, this entire 8-day activity will be captured as and how it happens and non-stop, featuring food enthusiasts Rocky Singh and Mayur Sharma, 40 families and the digital team on board the train. Here are some live updates from the Kurkure Family Express which is on its way for a fun filled ride. 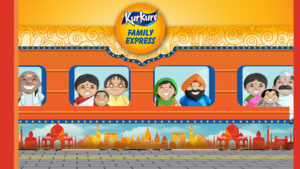 Speaking about the campaign, Vani Gupta, Marketing Director Snacks, PepsiCo India says, “The core idea of bringing families from across India together over a journey like this, unlike a traditional campaign the emotions and the bonding between the families is real and that at its core also brings out the ethos of the Kurkure brand and our new offerings which encompass the true local flavours of India.”

With a vast array of content being created on the train pushed across the digital landscape, speaking about this Varun Duggirala, Left Brain at The Glitch says, “The need to connect content with a sense of relatability is crucial with the digital audience and to do that a core digital team on the train is capturing these very family emotions through various visual mediums on the train and spreading it across the digital spectrum to drive the core emotion of “family bonding over Kurkure” in the online audience.”

#KukureFamilyExpress – India’s First Food Train Sets Off added by Newsroom on May 16, 2016
View all posts by Newsroom →