By Newsroom on July 21, 2015Comments Off on Laphroaig Whisky to Project Tweets as Part of 200th Anniversary Campaign 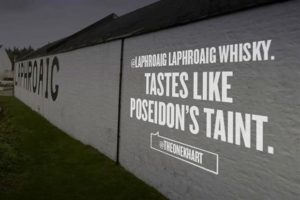 Laphroaig, the Scottish whisky, will project opinions of the brand sourced from Twitter onto its distillery wall, to celebrate its 200th anniversary.

The campaign called #BigOpinions will see Laphroaig select the best tweets – both positive and negative – from 21-25 July and will project them onto its distillery in the Isle of Islay, on a space measuring 20 metres in length.

The brand will take pictures of each tweet on the wall and will send them to the person who submitted them through Twitter, to encourage them to share it on their social channels.

The best 200 Tweets of the year will also be written on individual tiles on a wall at the distillery in Islay. The aim is to connect Laphroaig drinkers across the world with the whisky’s Scottish home.

This is the latest activity in the #OpinionsWelcome campaign that kicked off last year. The campaign encourages people to share their opposing views of the strong-tasting whisky.

Previous opinions include, “Smells like medicine. Tastes like soil. My whisky of choice,” and “My friend the oceanographer said it tasted ‘like dead fish,’ I was hooked.”

So far, the campaign has received more than 8,200 opinions from people in 80 countries.

Greg Saunders, the creative director on the campaign, said: “Laphroaig has been dividing opinions for 200 years. It is a whisky that evokes strong opinions, from friends and foes alike. Our #OpinionsWelcome campaign is a simple reflection of this brand truth. The campaign is an honest and open armed invitation for people to register their genuine opinions on Laphroaig whisky, and a platform on which to celebrate them all.”

The projection is being handled by Projection Artworks. Because the project takes place on the remote Isle of Islay, the company is using a Europasat satellite to ensure it has adequate bandwidth, rather than relying on existing infrastructure.

Laphroaig Whisky to Project Tweets as Part of 200th Anniversary Campaign added by Newsroom on July 21, 2015
View all posts by Newsroom →