By Newsroom on April 23, 2014Comments Off on Lay’s Air Pops Crisps ‘Pop’ Into Additional Markets With New Salt & Vinegar Flavour 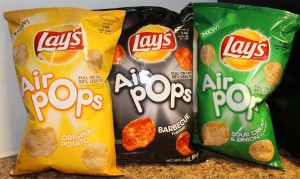 Lay’s potato chips, one of the marquee brands from PepsiCo’s Frito-Lay division, is expanding distribution of Lay’s Air Pops crisps to even more markets across the U.S. With 50 percent less fat than regular potato chips, Lay’s Air Pops crisps are a delicious and airy snack that delivers big taste. To celebrate the expanded distribution, the Lay’s brand is also introducing new Air Pops Salt & Vinegar crisps – featuring a savory blend of tanginess and crispiness.

Last year, Lay’s Air Pops crisps debuted in select markets in the Northeast and Midwest portions of the country as part of a limited run. This month, the flavourful snack option will “pop” up in California and the Pacific Northwest for consumers to enjoy on both coasts. In addition to the new Salt & Vinegar flavour, Lay’s Air Pops crisps are available in Original, Barbeque and Sour Cream & Onion.

“Lay’s Air Pops crisps are perfect for consumers who are looking for an alternative to regular potato chips that doesn’t compromise on flavour,” said Ram Krishnan, vice president, marketing, Frito-Lay North America. “By expanding distribution to California and the Pacific Northwest, we’re excited to introduce this new snack option to an even broader audience.”

To excite potato crisps fans from coast to coast, the Lay’s brand will also be “popping” by unexpected locations next week as part of an online consumer promotion. On Monday, April 28, fans in New York, Boston and San Francisco will be asked to share a photo via Twitter or Instagram demonstrating how they plan to make it a great week. Using the hashtag #AirPops, fans will have a chance to win a surprise delivery that is sure to inspire a great start to the week.

Lay’s Air Pops crisps are available at grocery stores in selected markets. A 3-oz. bag has a suggested retail price of $2.99.