By Newsroom on December 4, 2018Comments Off on LEAP’s New Food Films for Wagamama Supports their Expansion 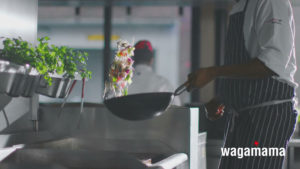 As the original creators of the mouthwatering food films displayed on their enormous Heathrow airport screens, LEAP have a strong understanding of the wagamama brand and are well-versed with meeting the challenges of the multiple display formats used in their many restaurant and advertising locations.

As wagamama continues its growth across UK and international locations, there was a need to maximise the potential use for the video content created for them. 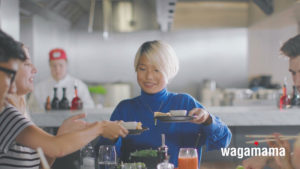 During pre-production planning and throughout the shoot, LEAP’s production team, led by Creative Director Danny Coster and Director Carl Prechezer, made sure that everything would be framed to facilitate editing and attractive viewing in all possible formats including square social media apps, D6 portrait screens, widescreen, in-store TV displays and Heathrow Airport’s unique 168-screen array measuring 21 x 2 metres. 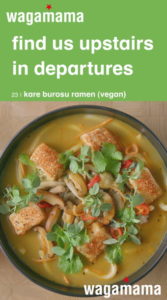 As markets outside the UK have stricter cultural and regulatory views on alcohol advertising, the latest video content shows fresh juices rather than beer consumed with the meals. Meanwhile, UK restaurant playlists will display the Asian beer offering as part of the sequence of dinner menu options.

To fulfil the latest brief, LEAP organised their food specialist production team for a multi-camera shoot to feature several new menu items, including a new emphasis on vegan choices and a children’s dish. 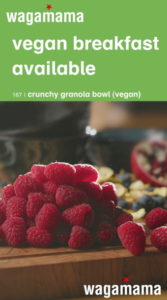 Continuing themes from the original stories which depict preparation through to enjoyment, LEAP used high-speed cameras to capture tempting slow-motion shots of fresh ingredients and assembled a cast of diners to taste the finished dishes. During post-production, LEAP’s colourist, Jon Davey applied his food film expertise to allow all the dishes to look their best.

In the spirit of wagamama’s engaging social media campaigns and to reflect the fun experience of friends sharing a meal, depictions of the banquets showed more interaction and included glimpses of the wagamama kitchen and serving team in these scenes.

The resulting collection of delicious video content launched in wagamama restaurants and OOH locations in good time to attract families during the half-term break and continue to roll out across social media.

LEAP’s New Food Films for Wagamama Supports their Expansion added by Newsroom on December 4, 2018
View all posts by Newsroom →